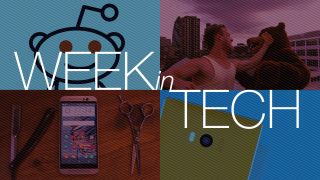 Remember last week's rumour that Microsoft is planning to kill Windows Phone? Microsoft's shedding nearly 8,000 jobs, and most of them are in its phone division. It's also writing off $7.6 billion from its acquisition of Nokia, a deal that only cost $7.2 billion at the time. Looks like Nokia should have stuck with Android after all. In a statement Satya Nadella said that Microsoft would "run a more effective and focused phone portfolio" in the short term, but the Lumia range and Windows Phone are clearly on life support – and Nadella's getting ready to pull the plug.

Is the Apple Watch on borrowed time?

The Apple Watch is a flop. That's what US analytics firm Slice Intelligence reckons, anyway, estimating that Watch sales have dropped to fewer than 5,000 units per day. However, those are US-only figures, they're taken from a period when Apple couldn't make a fraction of the Watches it needed to meet existing orders and they're estimates, so we'd take the news with a pinch of salt. Even if the numbers are accurate, the Watch is still stomping its rivals into the dust.

Game over for last-gen consoles

Come in, last-gen consoles: your time is up. That's how Bioware appears to see it, anyway: the Dragon Age: Inquisition developer says that future DLC for the game won't make it to Xbox 360 or PS3. As Dave James explains, "We're already into a stage where it's mostly only the iterative sporting titles which are producing new versions for the older consoles" and the big releases are PC, Xbox One and PS4 only. Will Rockstar do the same as Bioware with its imminent DLC for GTA V?

Reasons to uninstall Flash number 3,257: there's a major, major vulnerability in the Flash Player, a vulnerability so vulnerable that Hacking Team describes it as "the most beautiful Flash bug for the last four years." A patch was issued this week, but more vulnerabilities are expected to be uncovered in the coming days.

If your favourite subreddit's gone dark, it's because of the "genuinely lovely" Victoria Taylor: the brains behind Reddit's Ask Me Anything was dismissed by Reddit bosses in mysterious circumstances, and Redditors took many popular subreddits down in protest. We still don't know why Taylor was dismissed, but she's popped up to say how she's been deeply moved by the response and that while you can take the woman out of Reddit, you can't take Reddit out of the woman.

Do you have an HTC One M9? Don't update the software to 1.40.401.8 unless you really like charging batteries. A bug means that some phones are now taking up to 13 hours to charge. HTC reckons you can fix the problem by uninstalling Google Photos or by restarting the phone, but a proper fix hasn't been issued yet.

You'd think most people would know that cuddling up to snap selfies with enormous, hungry, human-killing bears was a bad idea, but apparently the message isn't getting across in Russia. Concerned that people are – yes! – ursine about, the Russian police have issued guidelines on the art of safe selfies. They're clearly needed: one young woman accidentally shot herself in the head while taking a selfie, a teenager died falling from a bridge onto an electrified railway in pursuit of the perfect selfie, and two young men discovered that pulling the pin on a live grenade results in a very different kind of flash than they were planning. Honestly, we aren't making any of this up.