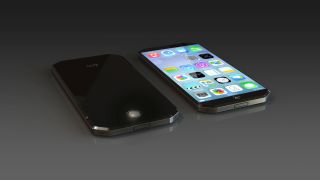 Probably not the iPhone 6 - but we wish it was

OK, we all know the iPhone 6 is nearly here. But ever since the iPhone 5S was another yawn-fest on the design front, the rumor mill has been churning out its own renders and concepts - be them based on dummy models or just artists frustrations with current design.

Whether close to the likely reality or not they all gives us a detailed, relatively complete look at how the iPhone 6 might turn out and highlight various possible aspects of the phone in the process, reflecting the rumours of a big screen, a curved design and more.

So to keep you going in the coming days and weeks until Tim Cook takes the stage, here are the best concepts and renders for you to look through - let us know which of them you think will be most likely to show up in Cupertino, and which you wish would!

Never ones to turn down a challenge, we created our own iPhone 6 concept. As you can see from the above image we envisaged it with a true edge-to-edge, bezel-free display and a super-slim 5.5mm thick build.

While the bottom edge is blurred here, you might also notice that there's no home button, leaving the front of the phone sleek and symmetrical.

In reality we'd be very surprised if Apple ditched the home button, especially as implementing Touch ID without one could be tricky, but the rest of this concept isn't a million miles away from the rumours we've been hearing.

It's thought for example that the iPhone 6 will be slim, though not quite that slim, with whispers pointing to 7mm for the 4.7-inch model and 6.7mm for the 5.5-inch iPhone '6L'.

It's also expected that the new iPhone will have a curved design, a little like in the image above and while we're not expecting a bezel-free display it is likely that the bezels will be smaller this time around.

We'd be more than happy if this concept did come true though, as it would make the iPhone 6 the slimmest smartphone on the planet and the first to do away with bezels, leaving the competition to play catch-up.

Martin Hajek is one of the more prolific iPhone 6 renderers around and he's put forward more than one possible design for it. The actual iPhone 6 is unlikely to look much like the concept above, which Hajek created in collaboration with iPhoneclub.nl.

Although this concept has rounded edges the overall design is rather more rectangular than the latest dummies and leaks suggest. It also lacks the two-tone rear shell that the iPhone has become known for and the screen is essentially bezel free, much like in our own concept.

But while we doubt the iPhone 6 will look like this there's no reason why it couldn't. The design doesn't seem all that out there and it's certainly stylish enough to be an Apple product - if a bit square.

Here we have a somewhat less convincing image. In fact that's an understatement, we'd eat our hats if the iPhone 6 looked like this. We'd eat all the hats. And then eat hat soup with the leftovers for a while.

This concept was devised by Michael Shanks and features a wraparound screen. It's not a total fantasy, as Apple has actually filed a patent for wraparound displays but we're not expecting to see one on the iPhone 6.

We may however be in for a slightly curved screen, allowing it to arc almost imperceptibly into the chassis. If Apple did release a phone with a wraparound display that could be a real game-changer, or it could just be a gimmick, but if nothing else it might make it possible to read notifications at more angles, which is surely a good thing.

Speaking of curved screens, here's one from Nickolay Lamm. Not only is it curved but it ditches the home button and would apparently be capable of creating an illusion of depth perception, to mimic a 3D experience in line with Apple's patent.

The shape seems like it would be a little unwieldy, especially when held to your ear, but we like the idea of there being nothing but screen on the front and the curves allow for a larger screen without increasing the phone's footprint.

Could you hold it? Probably not. Who wants to do that though?

The image above is another concept by Martin Hajek, or rather two concepts, as the handset on the left is an iPhone 6 while the one on the right is an iPhone 6C.

We're not expecting an iPhone 6C, though that hasn't stopped one store from advertising screen protectors for it and fundamentally this doesn't look a million miles from the iPhone 5C, just less chunky and with a relocated home button and smaller bezels to accommodate a larger screen.

The iPhone 6 concept isn't vastly different from Hajek's other concept that we discussed above, albeit this time it has a slightly more rounded design, more in line with what we're expecting to see.

This render from mornray886 was briefly believed to be an actual iPhone 6 photo, before it was revealed to be a render.

It's no wonder people were fooled (the screen smudges are a nice touch), but looking purely at the design it's certainly close to what we've seen in actual leaks, with a slim, curved build.

Here's an interesting one. The cut-out corners look nothing like anything we've seen from Apple and this concept doesn't appear to be based on any iPhone 6 rumours, so much as just an intriguing idea designer thinkbym had for the handset.

It's intriguing because those odd corners serve a purpose, with each one being home to a touch sensor for volume, home and power, so there's no need for buttons at all. It's a nice idea and sensors in place of buttons could definitely be a change for the better, but we're not entirely convinced by the retro-futuristic shape.

There's been talk of transparent displays coming to phones for a while, so it's no wonder that a transparent iPhone 6 concept has been created, in this case by Schoolpost.

There are any number of potential advantages to a transparent screen, such as the possibility of having one app open on one side and then flipping it over and having another displayed on the other.

But there are any number of obstacles preventing them appearing too, not least the fact that components are currently hidden behind the screen, so these would need to be shrunk dramatically for it to be practical.

The iPhone 6 won't have a transparent display and nor will any other mainstream handset in the near future, but the first company to really crack it (in a usable way) is likely to be onto a very big thing.

Curves in all the right places?

Thanks to LG and Samsung, curved phones like the one in the render above from Lewi Hussey are a reality. The LG G Flex and Samsung Galaxy Round have curved screens and not only do they look good but they allow for a bigger display while minimising the amount of space taken up.

But as yet they haven't caught on and we're not convinced that they're much more than a gimmick, so we can't see Apple going down this road. If it did though it's one of very few companies which might actually be able to make them popular - but could even Cook's Crew convince the world that it's a good idea? We're not sure.

Close to the real thing?

We'll finish with a convincing one. This render from Mark Pellin and shared by 9to5Mac is pretty much how we expect the iPhone 6 to look, based as it is on the dummy units that we've been seeing.

It mirrors the most prevalent rumours and leaks, with a slim, curved design, the power button on the side and an overall look that's pretty much identical to what we've seen in leaks.

So take a good look, because we wouldn't be at all surprised if this, essentially, is the iPhone 6.

It's not as imaginative and innovative as some of the other concepts we've looked at, but it's stylish without being showy and looks like an Apple product, but one with a new design and more curved ethos, which is exactly what the iPhone 6 needs to be.