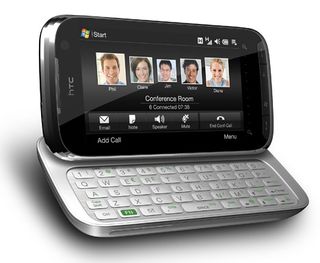 HTC's newest handset to hit the market, the Touch Pro 2, will be available to buy from 12 June, according to online retailer Expansys.

Featuring a full QWERTY keyboard and the popular TouchFLO user interface (popular mostly because it does such a stellar job of masking Windows Mobile 6.1) those that are craving the latest sequel can pick it up for £519.99.

Not exactly cheap, but at least it will come unlocked. Vodafone is currently offering it for business customers but has yet to give a release date, and TechRadar has spoken to HTC, which confirmed that this will be coming to other operators shortly but declined to name them as yet.

Beaten to the punch

Vodafone currently has not given details of the price of contracts it will be offering, nor a release date, so Expansys has beaten the operators to the punch once again.

Given the success of the original Touch Pro and the meteoric rise of HTC's mobile innovation (helped in part by delivering the first two Android handsets and thus making the switch to consumer mobiles from more 'business oriented models' easier) the Touch Pro 2 should be a winner.

A 3.6-inch touchscreen, a 3.2MP camera and the aforementioned QWERTY keyboard, with Nokia N97-a-like tilting screen, all bode well, and TechRadar will be bringing you another in-depth review of this phone in the next two weeks, so keep checking back to find out if this is the phone for you.