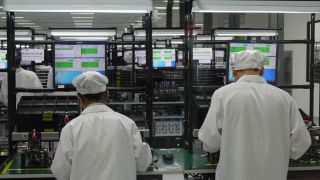 A lot goes into making a smartphone

It's all very well sniping from the sidelines when a new phone comes out. It's too big, too plasticky, too Apple-y... most of us are guilty of shirking a handset without thinking about the months, sometimes years, of R&D that's packed into every device - from the cheapest feature phones to the most premium of handsets.

To learn a little more about how a phone is made, TechRadar visited Lenovo's main handset factory in Wuhan, China, and saw first-hand what goes into making the most popular gadget around - the smartphone.

Lenovo's factory in Wuhan is a recently opened state-of-the-art facility whose nearby neighbour is Foxconn - the company behind the manufacturing of Apple goods.

Currently the factory makes 20 million mobile devices a year, which is around 1.7 million a month. This is set to change soon, though.

Lenovo recently acquired Motorola and it is likely production of tablets and phones under the Moto brand will shift to Wuhan. Given the factory has the ability to produce 100 million mobile devices a year, it has more than enough in reserve to take this manufacturing feat on.

Currently there are 3,000 people working at the factory but its total capacity is around 8,000. And in the factory the workers assemble but don't actually create the motherboards or plastic.

This is because Lenovo took the decision around 10 years ago to outsource the fabrication side of the business and saved itself a lot of money in the process.

Leader of the pack

On our tour we were shown the various stages a phone goes through before it is packaged up and shipped off around the world.

Production in the factory was split on to two levels. The upper level housed what's called SMT (surface mount technology) and all of the testing that select handsets go through. On the ground floor was the assembly area - where most things were done by hand.

This was definitely a factory that proves robots aren't quite ready to take over manual work just yet. Speaking to the factory foreman, he revealed that workers assembling things by hand worked best as robots would be far too costly to install.

There was one that we spotted, though. Shaped like a Roomba, this robot helper's job was to bring batches of motherboards back and forth on a set path.

Once the robot brings the motherboards, which makes up the heart of the mobile phone, they are then barcode scanned in batches of four.

The boards are then passed to a picker and placer whose job it is to take components from a flow of tape and add these bits and bobs to the motherboard.

To make sure that this is a smooth process, there is also someone on hand to make sure the tape that houses the chips doesn't run out and that the right components are made available to the picker and placer. When the components are all in place, the motherboard is then 'baked'.

This process was all done on the upper floor of the factory - we had to venture downstairs to see the handset actually take shape.

Current page: This is how your smartphone is made