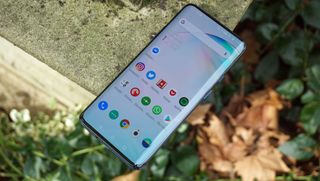 The OnePlus 7T Pro, above, needs wires to charge, but the OnePlus 8 Pro might not (Image credit: Future)

The OnePlus 8 series is expected to be introduced in the first half of this year, and the latest rumor suggests the top-end device will come with wireless charging built-in.

According to Twitter tipster Max J - someone who has leaked correct information in the past - the company will be adopting wireless charging for the first time this year.

He posted the rumor with the caption "charge like a pro", which suggests this may be a feature that's exclusive to the OnePlus 8 Pro, rather than also coming to the standard OnePlus 8.

If OnePlus does include the wireless tech, it doesn't mean it will be dropping its Warp Charge fast charging feature that's offered on current handsets when using a wire.

By including wireless charging, OnePlus will just be offering more ways for you to ensure your device doesn't run out of charge, and overall that's a positive for all users.

It may mean we see the price of the OnePlus 8 series increase so it can include this new feature, but we won't know that for certain for a while yet.

Current leaks suggest the OnePlus 8 series won't be launching until May this year, when we expect the company to host its own launch event.