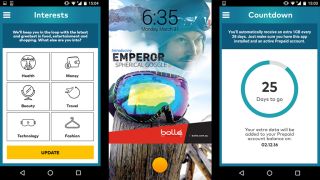 UPDATE: It appears the ad-funded data model is not a new phenomenon, with Melbourne-based startup Unlockd launching a similar concept last year – read on to find out more about it!

Would you be willing to suffer through a bunch of mobile ads in order to get your grubby mitts on some bonus data? Australian telco Optus is hoping you are, because the telco has just launched an app that does exactly that.

Available now on the Google Play store, Optus Xtra will give eligible prepaid customers up to 1GB of bonus data per month, or $2 worth of extra credit on daily plans every 28 days, so long as they’re willing to let targeted ads be displayed on their Android phone’s lock screen.

The ads that are displayed are static, with the option to view a video version that will help you accumulate more bonus data. Ironically, visiting an ad’s website or viewing a video ad will incur data charges, but simply viewing static ads will only cost you around 20MB of data per month.

In order to make sure that the ads displayed are relevant to you, the Optus Xtra app can be tailored to your interests – users can choose from eight ad categories, including beauty, employment, fashion, government and politics, health, money, technology, and travel.

The app was was developed in partnership with New Zealand-based start-up, Postr, while the ads are handled by the Singtel-owned digital marketing technology company Amobee.

The ad-funded data concept was introduced last year by Melbourne-based startup Unlockd, which offered Lebara customers up to 2GB of additional data, with the key difference being that those ads only appear after your phone has been unlocked. The model has also launched in the US with Sprint-owned Boost Mobile, in the UK with Tesco Mobile, and the Caribbean with Digicel Group.

In a statement, Matt Berriman, CEO and co-founder of Unlockd, said “It's encouraging to see Optus & Postr follow us into the ad-funded mobile space because it only helps to increase category awareness of the value exchange model in Australia. Hopefully we’ll continue to see more local carriers do so, in turn helping reduce consumers’ phone bill costs.”