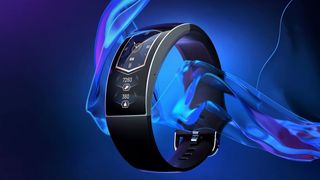 Originally unveiled as a concept device, a new IndieGoGo listing for the Amazfit X suggests Huami (the company behind Amazfit products) is nearing production for its most futuristic looking wearable yet.

The Amazfit X was teased in September 2019, with a curved display that gives this fitness tracker a unique design that the company's other products haven't had.

The fitness tracker has just been listed on crowdfunding website IndieGoGo, but so far you can only register your interest, and there's no clear sign of whether the company will be asking its fans for money to make the product or whether the listing will act more as just a way to pre-order it.

Previously, Amazfit had confirmed the Amazfit X would be launched in 2020, so taking it to a crowd-funding platform confuses matters a little. This may just be a listing that is used to advertise the upcoming tracker.

Regardless, it's set to feature a 2-inch AMOLED display with a 92-degree curvature that should see it fit comfortably on your wrist. It's also set to have 7-day battery life and sport a variety of fitness features, including a heart rate monitor and the ability to go underwater up to 5 meters deep.

The listing doesn't give us a clear idea on a release date for the Amazfit X, but we should hear more from the company in the coming months about when its next device will be introduced.

At CES 2020, Huami introduced the Amazfit Bip S and Amazfit T-Rex, so it may be a bit of a wait until we hear about another new device from the company.