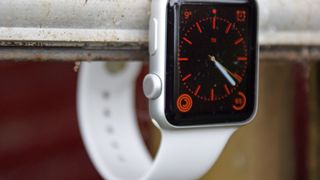 The small size of the Apple Watch meant the Cupertino firm had to come up with a new way for users to interact with the device, rather than relying almost entirely on a touchscreen, as with the iPad and iPhone.

One of the best solutions it came up with was the Digital Crown, which was essentially a supercharged home button, allowing users to zoom in and out, scroll through text, change the volume and a whole lot more, all by tapping or rotating the dial.

It makes a lot of sense on the Apple Watch, where achieving the same with taps and swipes on the screen would be difficult to say the least. But a newly published patent dug up by Patently Apple suggests the Digital Crown might one day appear on the iPad or iPhone too.

According the patent it could be used for similar things on those devices as on the Apple Watch, allowing you adjust the volume, resize text, snap a photo or lock the touchscreen.

We're assuming the above image isn't to scale, as the dial looks completely ridiculous and oversized; but even with a less intrusive design we're not sure it would be Apple's brightest idea.

The iPad already has volume buttons, we've never found ourselves wishing for a Digital Crown to take pictures with, and resizing text is something most people would rarely want to do, so a shortcut isn't really necessary.

So you can probably file this rumour firmly under 'crazy things that are never going to happen'. But there is one other interesting thing in the patent, namely a mention of devices with no border region, with the front surface taken up entirely by a touchscreen.

That's worth highlighting, as it's recently been rumored that Apple could ditch the bezel on future iPhones and build the Touch ID fingerprint scanner into the screen, so this is more evidence for that – just don't expect it on the iPhone 7.