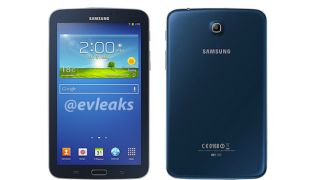 Is it time for a refresh?

Ideas that Samsung planned to slow down the amount of tablets it brought to market in 2014 have been completely smashed with word of three new Galaxy Tabs.

According to MySamsungPhones we are looking at the Samsung Galaxy Tab 4 series, bringing with it the 7-inch SM-T235, 8-inch SM-T335 and 10.1-inch SM-T535 - the latter of which we've heard before.

These all come with fairly similar spec sheets; a 1280 x 800 WXGA TFT (not AMOLED as we might have hoped) screen, 1.2GHz quad-core CPU and Android 4.4 KitKat.

The two largest tablets both employ 1.5GB RAM and 16GB internal storage leaving the Galaxy Tab 4 7.0 with 1GB RAM and 8GB storage. The good news is that a microSD slot adorns all three, allowing for a further 64GB.

Samsung's Galaxy Tab 4 10.1 will apparently sport an 8MP auto-focus camera on the back with a 2MP forward facing camera, beating the 7 and 8-inch models that only come with 3MP and 1.3MP snappers.

The new Samsung Galaxy Tab 4 range may break cover at MWC 2014 in a couple of weeks, where we also expect to see the Galaxy S5 touch down.