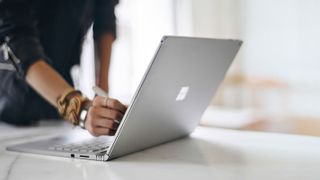 A new patent has been published which suggests that Microsoft is looking into ways to make the hinge in future Surface devices more durable – while making those devices ever thinner.

The new hinge would be stiff enough when open to allow people to use the touchscreen without damaging the device.

Hinges in devices like laptops are put through a lot of stress – with devices opening and closing thousands of times during their lifetime – which means they can often be the point of failure.

The fact that devices are getting thinner – and therefore more fragile – is also a concern, so it’s good to know that Microsoft is looking into ways of ensuring that even the thinnest devices have durable hinges.

According to Microsoft, “During testing, the shaft of the hinge mechanism experienced reduced stress and reduced incidence of failure during drop testing due to the improved support that the frame structure provides,” which hopefully bodes well for the increased durability of any future device that features the new hinge.