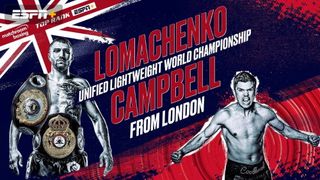 Vasyl Lomachenko is the world's best pound-for-pound boxer. Luke Campbell is the Olympic gold medalist going for a shot at the gold. London's colossal O2 Arena is the venue. It's looking like an unmissable showdown and you won't need miss a second of the action, no matter where you are in the world, by following our Lomachenko vs Campbell live stream guide below.

Lomachenko's reputation as a legend still operating in the boxing ring will only grow further should he add a third world lightweight title to his collection at the O2 tonight.

Lomachenko vs Campbell: where and when?

What date is it? The Lomachenko vs Campbell fight is set to take place today.

Where is it? The O2 in London.

Widely regarded as the world's best boxer, the 31-year-old Ukrainian won a world title in his third professional fight, became a two-weight champion in his seventh and a three-weight world champion by the time of his twelfth - all this on top of his fearsome amateur record of 396 wins to one loss.

Lomachenko's last outing in the ring saw him retain his unified lightweight world title in a dominating display against Anthony Crolla in April. Tonight brings another British challenger and a pop at the vacant WBC title, but former Olympic champion Luke Campbell should bring a greater challenge this time out.

Campbell, (20-2, 16 KOs), 31, may have lost his only previous title fight two years ago against Jorge Linares for the WBA title, but he lost on a contentious split points decision and has shown plenty evidence he's ready for another stab at the top level.

Below you'll find all the options for watching tonight's fight. No matter where you are in the world you can get a Lomachenko vs Campbell live stream online. ESPN+ is showing it in the US, but you'll need our help and a VPN if you're somewhere that isn't showing the boxing.

Below we've listed all of the best places to live stream the Lomachenko vs Campbell fight online in the US, UK and Australia.

If you're away and there is no official broadcast option where you find yourself, then the only alternative that we know is to use a VPN to dial in to a country that does have one. The software is perfect for this as it allows you to change your IP address so you appear to be in a completely different location. We've tested hundreds of options and can recommend these as the best VPN services currently available:

1. Express VPN (comes with a 30 day money back guarantee)
This is the #1 rated best VPN in the world right now thanks to its speed, security and simplicity. You can watch on many devices at once including Smart TVs, Fire TV Stick, PC, Mac, iPhone, Android phone, iPads, tablets etc. Check out Express VPN and get 3 months FREE with an annual plan.

3. IPVanish supports up to 10 devices, so great on the go and with security as a priority.

ESPN - and, in particular, its streaming service ESPN+ - will be showing tonight's big fight from London, with the main event set to start at around 5.30pm ET / 2.30 pm PT.

It costs $4.99 per month, which includes access on laptop, desktop, mobile app and TV streamer apps such as Apple TV, Amazon Fire TV, Roku, PS4 and Xbox. And there's no commitment either, you can discontinue the service at any time.

Outside the US on fight night but still want to watch that ESPN+ coverage, then there's the possibility of using a VPN to access it from abroad.

How to live stream Lomachenko vs Campbell in the UK

The big fight from North Greenwich in London will be broadcast in the UK via Sky Sports Box Office, with coverage beginning with the build up and undercard from 6pm.

Fans can also watch online via the Sky Sports Box Office app and website, and through Now TV on iPhone, iPad, Android phone or Android tablet.

Out of the UK and need a stream of that PPV? Try a VPN to change your IP location.

How to live stream Lomachenko vs Campbell in Australia

Kayo Sports will also be on hand with full live coverage of the fight. The streaming service features no lock-in contracts and also includes access to over 50 sports, both live and on demand.

For those wanting to watch Kayo Sports subscription coverage overseas, you'll need to go down the VPN route as above.