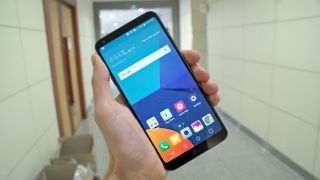 The LG G6 doesn’t have the older Snapdragon 821 chipset because of an exclusive deal between Samsung and Qualcomm to be the first to put a Snapdragon 835 smartphone on sale. There is no deal.

Rumors have been circulating that suggest an exclusive deal between chipset maker Qualcomm and Samsung for the upcoming Galaxy S8 prevented LG using the latest Snapdragon 835 SoC in the G6 – but those rumors have now been dismissed.

Speaking at MWC 2017 in Barcelona, Qualcomm’s SVP for Snapdragon Keith Kressin said “I’ve read the same rumors – there’s nothing exclusive about a specific OEM. Each OEM has to make a decision on their products based on a number of different factors.

“There is nothing contractually that constricts one guy or another.”

Samsung isn't even the first manufacturer to announce a Snapdragon 835 phone. The Galaxy S8 launch isn't until March 29, while the Sony Xperia XZ Premium and to a lesser extent, the ZTE Gigabit phone, both arrived at MWC with the chipset.

Kressin suggested that manufacturers may use older components to get to market quicker, saying “if an OEM thinks they can get their product out quicker then they may use an older chip to do so.”

LG may have opted for the already established Snapdragon 821 chipset to gain an advantage over the likes of Sony, Samsung and HTC by getting its flagship out first – but we’ll have to wait and see if it does go one sale before Samsung’s March event.