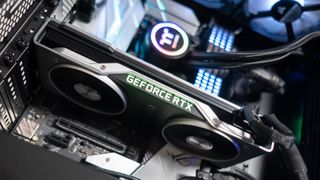 It appears Nvidia has been caught in the crossfire of legal action because the graphics card maker uses TSMC-manufactured technology, yet AMD isn’t in the firing line – despite also using TSMC tech.

So what, exactly, is going on here? As Reuters reports, GlobalFoundries is suing another chip-making giant, TSMC (Taiwan Semiconductor Manufacturing Company), alleging that the latter has infringed patents and unlawfully used its technology to the tune of “tens of billions of dollars” worth of sales.

To that end, not only is GlobalFoundries looking for a big payout in terms of damages, but is also seeking to block imports of TSMC-made tech that uses the relevant patents in the US and Germany (the countries where the lawsuits are being filed).

And that means companies which use chips produced by TSMC in their products are affected, with other defendants in the suits including Apple, Broadcom, Mediatek, Qualcomm, along with Nvidia – but not AMD.

So, part of the aim of these lawsuits would appear to be stopping Nvidia selling its graphics cards in the US (and Germany), as the firm’s latest Turing products use TSMC’s 12nm process.

However, the odd bit here is that AMD also uses TSMC, specifically the 7nm process with its latest Navi graphics cards – and Zen 2 processors for that matter – yet AMD isn’t mentioned as a defendant in the lawsuits.

So it would seem that Nvidia is being targeted, whereas AMD is getting away scot-free.

Why is this the case? As PC GamesN observes, this might partially be tied up in the previous relationship between AMD and GlobalFoundries, as the latter was once the manufacturing division of the former (before being spun off into a separate company back in 2009).

But perhaps more importantly, AMD is still a big customer of GlobalFoundries, as while TSMC might produce the 7nm chiplets, GlobalFoundries manufactures the I/O die. And going forward, AMD is likely to remain a major client – so not a company GlobalFoundries will want to risk angering.

Patrick Moorhead, an analyst at Moor Insights, told FT.com: “With GlobalFoundries focusing more on [Internet of Things] and [radio frequency], it appears to be going after companies that likely won’t be future customers but are believed to infringe on its patents for leading edge process.”

Moorhead further observes that GlobalFoundries likely already tried to obtain royalties behind the scenes, and having failed, is now resorting to legal action, adding: “The end OEMs [like Nvidia] aren’t the main target, but targeted to put pressure on TSMC.”

So this is more about arm-twisting TSMC, and obviously it seems unlikely that Nvidia’s GeForce cards would be effectively banned in the US – although that’s still a worrying possibility, of course. Even if that did appear to be coming about, though, it’s likely Nvidia would then strike a royalty deal to avoid that prospect, naturally.

The same goes for the other tech companies named as defendants, which include Apple as mentioned, but also the likes of Asus, Google and Lenovo.

TSMC’s reaction to the lawsuits has been to fire back some strong flak, with the company issuing a statement to say: “We are disappointed to see a foundry peer resort to meritless lawsuits instead of competing in the marketplace with technology.”

TSMC further said that it would fight this legal action “vigorously” using “any and all options” to defend itself, so predictably, it’s not about to take this sitting down.

One thing’s for sure: it will certainly be interesting to see how this one unfolds.