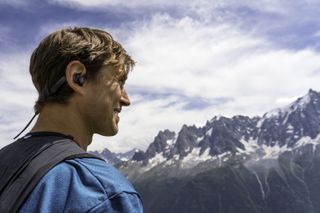 Jaybird has announced a new model of in-ear headphones for serving the needs of endurance runners and athletes – the Tarah Pro.

With a 14-hour battery life for even the longest workouts (seriously, who works out for that long?) the Tarah Pro is also both sweatproof and waterproof with an IPX7 rating, meaning it can withstand water submersion up to 1m deep for up to 30 minutes.

Jaybird has also forgone the usual USB-C port for a distinctive, water-resistant connection point that won't have an issue in wet weather or extreme exercise conditions.

The design is a notable departure from the standard Tarah model, with a cabling material similar to climbing rope: tactile and likely weather appropriate, but unlike anything we've seen on a pair of headphones before. It's even made of a reflective thread for visibility in darker conditions.

Based on consumer feedback and testing with professional athletes, Jaybird have also developed the ways you can wear the Tarah Pro, allowing you to rotate the earbud cable between standard under-ear wear and a firmer over-ear fit.

The Tarah Pro retail at $159 (£139 /AU$229) and are now available in Black/Flash, Mineral Blue/Jade and Titanium/Glacier color options.