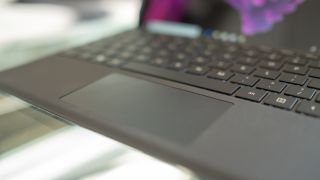 A patent has been discovered that suggests that Microsoft is looking at reinventing the touchpad for a future Surface Pro device, with the innovative new touchpad featuring multiple touch input zones.

The patent was filed in February 2018 and published August 15, 2019, and in it, Microsoft claims that it wants to move away from simplistic touchpads that just allow a user to move the mouse cursor, and fully realize the potential of the trackpad.

The patent describes how a new touchpad could be divided up into different input zones, so while it would still act as a single input, each zone could be used for a different function.

According to the patent, “based on different contextual factors, the single logical input surface can be divided into different touch input zones that can each… invoke different respective functionality”.

As always with patents, we might never see this tech in an actual product, but we’re pleased to see Microsoft is looking at ways of revolutionizing the touchpad – which has been a part of laptop design for decades, but has seen little in the way of innovation over the years.