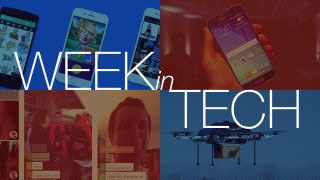 It's been a funny old week. We've seen One Direction go in two directions, witnessed a global outcry because a man was disciplined for punching a co-worker in the face and seen the worst viral video of all time featuring Nick Clegg.

But while the world outside may be frightful, the world of tech is mainly delightful. This week we discover why Google Glass will make a comeback, how Facebook plans to claim your immortal soul and why this year's laptops will make you more excited than a Top Gear presenter in a Porsche. Guaranteed to be 1,000% more interesting than a star in a reasonably priced car, it's week in tech!

"Facebook wants to be everything to everybody", Gary Marshall says, and it "wants to replace the internet." He might be right. This week Facebook unveiled the latest steps in its world domination plan with apps to replace email, SMS and newspapers and what Marshall describes as "all of our messaging personal data and interpersonal interactions and shopping and health data and hopes and fears and dreams and darkest secrets."

One of the biggest stories is the news that Facebook Messenger will become a platform that third parties can use, so you'll see apps using Facebook to deliver their messages. There are already 40 apps for the platform, and they'll show up inside the Facebook app so you never have to leave its warm embrace.

It seems that live video streaming is set to be the next big wave in "social media", with Meerkat debuting to a lot of buzz earlier this month. Periscope, the latest app of this ilk to get people talking, launched this week with one key differentiator: it's backed by Twitter. It also lets you archive clips for viewing later - something that Meerkat doesn't. We had a go at making our own Periscope stream on the day of launch, before putting it head to head with Meerkat.

Get your game on

We love PC gaming, and we've devoted an entire week to it: from the best PC Zombie shooters of all time to the power of Minecraft and the tech that's going to transform the way we play games, everything you need to know about gaming's past, present and future is right here.

Let's be honest. For all its joys, Android is often spoiled by manufacturers and carriers who insist on putting their own apps on your pristine new smartphone. Hurrah for Samsung, then, because it's decided that customers who buy the Samsung Galaxy S6 and Samsung Galaxy S6 Edge will be able to remove the pre-installed applications. That's going to make a lot of Samsung fans very happy.

The dark side of tech

Technology is a happy, sunny thing, except for when it isn't. Rene Millman has uncovered the tech sector's dirty laundry and shared some of the dark secrets of the industry. Those secrets include crazy cost-cutting, discrimination and disappearing kit.

Sticks and drones will come to homes

While Facebook tries to take over the virtual world, Amazon's continuing to annex more and more of the real one. Its latest wheezes include sticks and drones. The former is its Fire TV Stick, available for as little as £7 to new Prime subscribers and capable of turning even hotel TVs into Amazon Prime Instant Video viewers, and the latter is its ongoing investment in flying machines. While its drones are still grounded in the UK, the US has given Amazon the go-ahead to begin test flights for drone deliveries.