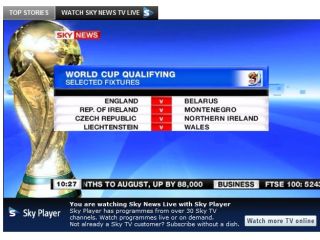 Sky News has utilised the power of the Sky Player and is now free to view online.

The streaming version of the news channel was always available to registered and paid members of the site, but now Sky has decided to unleash the channel for everyone to view.

Found at www.skynews.com, the new 24/7 streaming version of the channel can be found in a tab to the right of the site's top stories, labelled: 'Watch Sky News TV Live'.

The use of Sky Player is just one of many tweaks that have been done to the site, with Julian March, Senior Executive Producer for Sky News online, saying about the updates "reinforce our total commitment to video on the site.

"Breaking news in video is right at the top of our offering. We're delighted to showcase the great quality of Sky Player, and to give non-Sky customers access to just one of the many channels available to subscribers.

March also commented: "With Sky News now available on more platforms than ever – on TV, online, on mobiles, through iPhone and iPod touch apps, at train stations and on planes – there's barely a screen in Britain where you can't access Sky News."

The move to free is an interesting one for Sky, who is owned by Rupert Murdoch's News Corporation.

Murdoch has been in the headlines recently with his views that online news should be paid for.

The launch of Sky News for free may well be a model for the future – get the video for free, but the words you have to pay for.