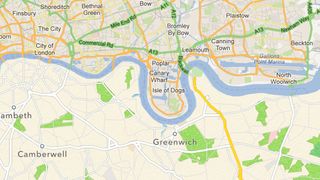 Still the thorn in Apple's side

Apple Maps has made decent strides forwards since its disastrous launch, but there's still a fair bit of distance to go. A distance that won't be travelled by iOS 8, it seems.

That's the word from some sources in the know, speaking to TechCrunch, who claim that planned engineering work on Apple's map service has been delayed beyond the next big software installment.

"There were multiple improvements that didn't make it into iOS 8," one source said. "No map improvements planned for iOS 8 release were finished in time."

Earlier in the year we reported that Apple was planning to add public transit directions for public transport with iOS 8, something that would make its service more competitive with Google Maps.

The latest report adds that "more reliable" data was also set to be added, along with more points of interest (as was also mentioned in our previous story).

A separate report from last month pinned iOS 8.1 as the update that will bring transit routing, so we may at least get that feature sooner rather than later.

The reason behind the lack of improvements? A lot of poor planning and internal politics, allegedly.

"Many developers left the company, no map improvements planned for iOS 8 release were finished in time," said a tipster.

"Mostly it was failure of project managers and engineering project managers, tasks were very badly planned, developers had to switch multiple times from project to project."

Another source backs this up, stating that "planning, project management and internal politics issues" were the biggest contributors.

Sorry folks, looks like you'll be relying on Google Maps for some time yet.