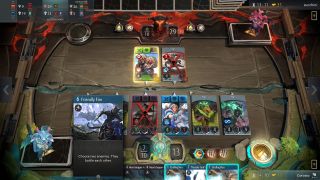 Intel has released new Universal Windows Driver (UWD) graphics drivers for Windows 10 – also known as Windows Modern drivers – with some nifty features including support for a couple of new games, and further support for the automatic tuning of game settings for a number of older titles.

The drivers are version v25.20.100.6444, and work with Intel’s integrated graphics solutions on Windows 10 (64-bit) machines running the Fall Creators Update or newer.

Support has been added for two new games: Farming Simulator 2019 (which was unleashed last week), and Artifact, Valve’s new card game (pictured above) which puts a different spin on the genre compared to Hearthstone, and was only released yesterday.

A new ‘rescan’ button has been added to the control panel which, as the name suggests, scans for newly installed games (without having to reboot your PC).

Plus support has been added for tuning a number of new games, namely the following:

The new graphics driver comes in the form of a self-installing EXE which you can grab directly from Intel here.

Note that if you install this UWD package, it isn’t backwards compatible with previous graphics drivers. In other words, if you decide you don’t like this new driver, and want to revert to a previous legacy version, you must fully uninstall the UWD driver from Windows Apps and Features, and make sure you reboot your machine, before proceeding to install the older driver.

If you don’t do this, you risk what Intel describes as “minor to major system instability”, so do bear that in mind.