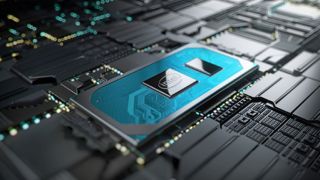 Intel Ice Lake performance has appeared in a leaked PassMark result, showing faster performance than the AMD Ryzen 5 3500U, despite Team Red's chip having a higher base clock speed.

This follows another leaked benchmark, which appeared back in May in Geekbench.

This one via PassMark, spotted by famed hardware leaker TUM_APISAK and Notebook Check, shows the Intel Core i7-1065G7 scoring 10,316 points in PassMark's CPUMark test, compared to the Ryzen 5 3500U's 8,042 points. This PassMark result has been deleted, but that doesn't mean you can't find a cached version.

Digging into these results shows significantly better IPC (instructions per clock) performance on Intel's Ice Lake chip. This is a leak, so you should of course take it with a grain of salt, but the Intel Core i7-1065G7 has a base clock of just 1.3GHz compared to the 3500U's 2.1GHz, but manages to beat AMD's chip in the single-thread rating.

It should be noted, though, that the AMD Ryzen 5 3500U is based on the Zen+ architecture, rather than the 7nm Zen 2. Intel claims that the 10nm Sunny Covearchitecture will boast an 18% IPC improvement over Skylake, but AMD also claims 15% IPC improvement in Zen 2 over Zen+.

Either way, we won't know how Intel Ice Lake mobile processors actually perform until we see them out in the real world. Luckily, they should be on their way out to retailers now, so we shouldn't have to wait too much longer to get our hands on Ice Lake.