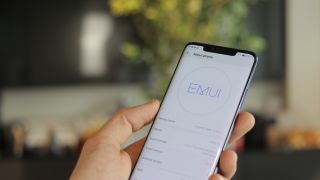 We're expecting the Huawei Mate 30 Pro to launch around September or October 2019 alongside its non-Pro sibling, and as that date draws near, it's almost inevitable that the number of leaks and rumors surrounding it grows steadily. The latest leak gives us perhaps our clearest look at the device too, if it turns out to be true.

A leaked promotional image of the Mate 30 Pro has surfaced, as most Huawei leaks do, on Weibo, a Chinese social media site. The image shows the front and back of the device as clearly as you'd expect from a picture meant to show off the device – warts and all.

The most noticeable aspect of the image is the quad-lens rear camera, displayed in a circular array on the back of the phone. We've heard rumors that the Pro device will have this many cameras, consisting of two 40MP snappers, a Time-of-Flight (ToF) sensor for accurate bokeh blur, and an 8MP camera with a telephoto lens for zoomed-in shots.

However we've also heard rumors of it having five, or three, lenses, in a circle, straight, or square design, and the aforementioned leaked specs are only rumors for the time being, so take them all with a pinch of salt.

In the image we can also see a screen that curves at the edges, like the Huawei P30 Pro, and what looks like a Honor 20-style side-mounted fingerprint sensor, although this could easily be a rather low power button.

Also shown in the images is the Huawei Mate 30 Pro's screen, and it looks set to have a pretty sizeable notch at the top, to house the front-facing camera and sensors. When we say 'sizeable' we mean 'wide', as it looks pretty long, but not too thick, and it seems to be the thinnest notch Huawei has used so far.

This notch could be present only on the Pro device however – in the Mate 20 range, the Huawei Mate 20 Pro had a fairly wide notch while the base Mate 20 only had a smaller 'teardrop', and the same could happen for the Mate 30 range.

By bringing back the full notch (neither the P30 nor P30 Pro had a wide notch), Huawei is bucking the common smartphone trend of ditching the screen-space-stealing feature for another tactic – but that's only if this leaked image turns out to be accurate.

Is the leaked image real?

While the leaked Huawei Mate 30 Pro render looks official, that doesn't necessarily mean it is, so we're taking it with a big pinch of salt.

Firstly, the closest of the first three phones looks bizarrely angled, as though it has been manipulated heavily or edited poorly, and therefore the proportions look rather 'off'. This surely wouldn't be the case if the image was created by an editing team with the devices to hand.

Secondly, all the information shown has already been leaked or confirmed in one capacity or another – the text talks about the Kirin 990 chipset, for example, and we already fully expect this chipset will be used for Huawei's next range of devices.

Thirdly, the design is very simplistic. Granted, that's Huawei's style for adverts like this, but it does mean it would be very easy to imitate, with fan renders based on leaks and rumors used in lieu of real phones.

On Slashleaks, a website used to judge the authenticity of leaked tech images, this leak sits (at the time of writing) at a 'trust score' of 63% – that's a pretty low score compared to many leaks on the website, and it suggests there's not much faith in the images.

We'll know for sure if this leaked promo image is real in September or October, which is when we're expecting the real Huawei Mate 30 Pro to launch. TechRadar will be on hand to report on the launch, as well as eat our own words if this image turns out to be correct, so stay tuned towards the end of 2019 for all the tech action.