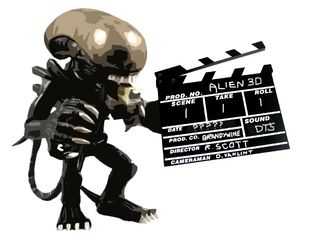 Ridley Scott has discussed his plans for making a 3D prequel to Alien. In an interview with website Ain't It Cool he extols the virtues of shooting in 3D and makes light of the technical challenges faced when shooting stereoscopically. He's also quick to dismiss audience complaints about the quality of some 2D to 3D conversions.

His main points are:

1. There are no limitations to filming in 3D

Because he's a camera operator-cum-director Scott believes the disciplines of being a lensman make it straightforward to think and work in 3D. "I always (camera) operate. I operated entirely on Alien, for instance. Because I'm an operator I think lenses. If you think lenses then the crossover to 3D honestly is nothing, " he reassures.

2. Shooting in 3D doesn't slow you down

"I was told it (shooting in 3D) was going to slow us down… it didn't slow (Michael) Bay down. Bay is moving like lightning," says Scott. The only difference is that "I'm adding dimension."

3. Editing is a cinch

Scott says he gets asked if he's worried about how shots from the 3D Alien movie will cut together. His response is that no, he's not worried because "when I'm planning I think in 3D anyway." Even when he's storyboarding a 2D film the scene is always thought of in terms of the dimensions. For example if he's got a deep two-shot, he thinks should he cover that in singles or not? "'Will I need a reversal?' You're already thinking in 3D."

Light is used in 3D movies to create depth much more than 2D and means films need to be quite bright. Does Scott feel that this is at odds with Alien's atmospheric low lighting? His solution is to use faster film stock (800 ASA over the normal 500 ASA) to give him an extra stop of light.

Scott thinks that cinema audiences only complain about the fact that 3D movies originated in 2D because it's fashionable to do so. He says: "I could show you 2D to 3D and you wouldn't know the difference." He believes audiences are motivated to moan about the price premium charged by cinemas to see 3D but he says: "You're still paying for the effect. Really, it's very close. 2D to 3D is awfully close."

Via Ain't It Cool