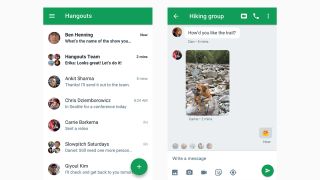 Update: Hangouts boss Scott Johnson says Hangouts isn't shutting down... well, not exactly. Users will be shifted to Hangouts Chat, the Slack-style variation that is currently only available in G Suite, according to Johnson.

Our original report is below.

It looks like the writing could be on the wall for Google Hangouts... again. The venerable messaging app is going to close down to consumers at some point in 2020, according to sources speaking to 9to5Google, though it will live on as a business tool.

Based on internal roadmaps inside Google, 2019 will be the last year you can make the most of Hangouts unless you've signed up to G Suite. That won't come as much of a surprise to those who've been watching the development of Hangouts closely – Google has largely given up on Hangouts as a messaging tool for the masses.

That's a shame, because Hangouts is actually very good: lightweight, versatile, and available everywhere from your Gmail inbox to your phone. It certainly fared much better than Google Allo, which was built primarily to replace Hangouts.

Now it would seem Google is turning its back on both Allo and Hangouts in the near future and focusing all its attention on Android Messages – or rather the chat platform that underpins apps including Android Messages.

In an attempt to build something approaching an iMessage competitor, Google is backing the RCS or Rich Communication Services standard. It essentially gives good old SMS a few useful upgrades, so it can better handle media files and group chat and so on, but so far the phone networks have been slow to provide the necessary support for it.

Hangouts was already a pretty decent iMessage competitor, but apparently Google doesn't agree. As yet there's no official word from Google about how long Hangouts is going to last, but we wouldn't bet on being able to use it into the next decade.