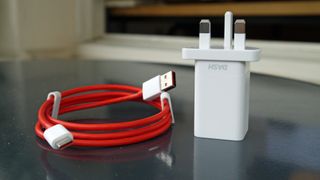 Google may have a problem with the quick-charging battery tech you'll be looking forward to getting on your next phone.

It is now discouraging the use of third-party quick-charging technology on Android devices that use USB-C connectors. It may one day even ban the tech altogether and force manufacturers to embrace the industry standard, USB Power Delivery tech.

It's calling into question technologies such as Qualcomm’s Quick Charge – which you’d find in the Google Pixel, LG G5 and the BlackBerry Priv - or Dash Charge, which is on the OnePlus 3.

Other tech which could be affected includes Motorola's Turbo Charging, Oppo's VOOC and Huawei's SuperCharge.

Google essentially wants to stop manufacturers messing around with Vbus voltages in a way that could cause problems with the hardware. Instead it asks manufacturers to embrace USB Power Delivery.

The Android Compatibility Definition Document for Android 7 reads, “Type-C devices are STRONGLY RECOMMENDED to not support proprietary charging methods that modify Vbus voltage beyond default levels, or alter sink/source roles as such may result in interoperability issues with the chargers or devices that support the standard USB Power Delivery methods."

It continues, “While this is called out as 'STRONGLY RECOMMENDED', in future Android versions we might REQUIRE all type-C devices to support full interoperability with standard type-C chargers.”

But with more and more mobile devices adopting USB-C over microUSB, this is sure to impact on upcoming phones and tablets.

We’ve asked Qualcomm, Motorola, Oppo, Huawei and OnePlus whether either would be willing to drop its fast charging tech for USB-C devices - we'll let you know if we hear back.

There’s no mention of how Quick Charge will be effected for older USB types though, so your Galaxy S7 wouldn't be affected by this as it charges via microUSB.