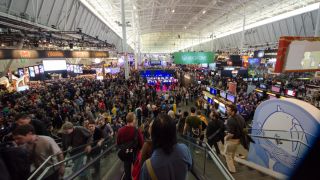 Welcome to the nexus of nerdery

We survived the writhing mass of costumed convention goers at PAX East 2014 to bring you previews of the latest in gaming hardware (and some software). Just kidding – we had a blast at the east coast's biggest and baddest video game show. In fact, it was so much fun that we'd like to highlight the coolest moments from the show:

But first: PS4 vs Xbox One vs PC

It's been six months since Sony and Microsoft started their next global battle for living room gaming domination. The Sony PS4 and Xbox One have been neck and neck in some ways, while the race has definitely been more one sided in others.

But there's no way we can forget the sneaking, silent 10-ton gorilla in the room: the PC. PAX East 2014 was our first chance to ask fans at such scale which is best since the launch of these sleek, miniature monoliths of gaming. (Plus, it was a lot of fun.) PC Gamer Editor-in-Chief Evan Lahti and I attempt the answer the "why" behind the overwhelming response you'll see below:

Gaming laptops no longer need be the hulking beasts we've known them as for years, but they're no less power-packed on the inside. Proof of that is the MSI GS60 Ghost Pro, a 15.6-inch gaming laptop that comes in at around four pounds. And behind its 2880 x 1620 screen lies the latest Nvidia mobile GPU and Intel Core i7 processors.

The best part? It played Metro: Last Light at 3K resolution with little issue – with the detail settings pared down a bit, of course. Now, imagine what it could do with less demanding games pushing that many pixels.

Steam controller gets a date

In perhaps the biggest scoop of the show, PC Gamer learned from an unnamed source that Valve's Steam controller is expected to launch between October and November of this year. If that's the case, it's reasonable to expect at least one Steam Machine to launch alongside the controller this fall.

But which will it be? And how much will the things cost? Well, we know that the Alienware Steam Machine will be "competitively priced" against the PS4 and Xbox One. It's bound to be hotter than usual this winter.

The Astro A38 headphones are an extremely luxurious pair of Bluetooth headphones with a comfortable fit and topnotch audio quality, Kevin Lee says. They might not have the best noise canceling and isolating qualities, but that's to be expected with an open-ear design.

From afar, people will still almost immediately recognize the A38s as a pair of Astro headphones and that's part of the appeal. The gaming audio giant has taken its years of experience and made a great pair of regular headphones, but we'll have to wait until we can put some serious listening hours in before we can deliver our final judgment on the Astro A38. You'll be able to grab these cans for $229 (about £ 136/AU$ 243) after they exit "beta testing" – whenever that happens.

Read our hands on Astro Gaming A38 gaming headphones review

Respawn Entertainment, the folks behind the next big thing in shooters (do we really need to call it out by name?), held a panel for its first game and shared lots of details. A perfect way to cap off PAX East, the Titanfall makers shared the first-ever image of Titanfall: Expedition.

This is the first map pack for the "OMG I'm piloting a death machine!" simulator, and will introduce three new environments to the game. The most notable of which is Swampland, a tree-littered everglade that should make for interesting Titan-toppling traversal when the map pack launches this May.

Members of the team also spilled the beans on some upcoming features, like hashtags. Yes, just like the ones you use on Twitter, you'll soon be able to join fellow players by joining "hashtag" groups in the game. Just make a hashtag in the game, share it, and start a new community. A social network predicated on robots, lasers and explosions is the best kind.

Sony Online Entertainment head John Smedley and Nvidia's marketing chief Tom Peterson were also on hand to chat online gaming and hardware's role in the industry, respectively. And we caught the whole conversation on video – check it out already!

Next Page The best of the rest
See more Consoles news