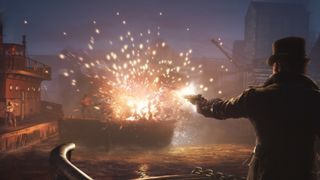 Ubisoft's PS4 catalogue outselling all around it

Games publisher Ubisoft has released its first quarter sales figures for this year and they make rather sombre reading for Microsoft with Playstation 4 titles outselling their Xbox One equivalents by more than two-to-one.

Though it is just taking into account Ubisoft's own sales it's still a pretty raw reflection of the overall market share dominance Sony's console has over the relatively poor-selling Xbox One.

Microsoft's flagship console is going to need a really good holiday period this year to close the gap on the PS4.

The Playstation 4 made up for 27% of Ubi's sales in the first three months of this year, with the Xbox One only accounting for 11%.

Putting that into context are the sales figures for the last-gen consoles - both PS3 and Xbox 360 are seeing equal footing with the Xbox One at 11% over the same period.

With the next installment of its Assassin's Creed franchise dropping this Autumn, the London-based Syndicate, but not appearing on either of the last-gen consoles, that should see the latest Microsoft machine pulling ahead of its last-gen compatriots.

Interestingly though both the latest consoles saw a drop in sales the first quarter of this year compared with the same time frame of last year. With the PC games market going from strength to strength it's become Ubisoft's second biggest revenue generator, now accounting for 23% of its sales.

That's almost a 10% jump from the PC's position last year and looks to have cannibalised market share from both the consoles.