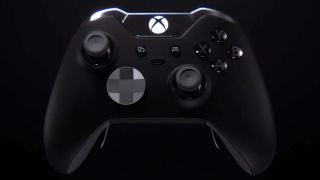 Microsoft has just unveiled its next-gen game controller and it looks stunning, certainly more exciting than just having a new 3.5mm audio jack...

Packing a huge amount of customisation and functionality the new Xbox Elite Wireless Controller is coming this Autumn, with both Xbox One and Windows 10 compatibility out of the box.

The big change is there's two pairs of paddle switches on the reverse of the new Elite controller and a host of extra precision functions to the triggers, analogue sticks and the funky, re-designed D-pad.

The more aggressive-looking controller has taken the same overall design as the traditional Xbox One controller, and made it...y'know...more elite.

It's those new paddle switches which will garner the most early attention, making it a beast for any racing game, from Project Cars to the new Forza.

But everything else about it has been redesigned to allow a greater level of flexibility and accuracy than the existing pad, aiming to make it a great fit for a wider selection of game types.

The triggers have adjustable force levels, allowing you to activate 'hair trigger' locks for the twitchy FPS-ers out there, chasing that Halo 5 Guardians fix, and for the fight fans that geometric D-pad is promising extra accuracy too.

Each of the front buttons can be switched around and so can the four paddle switches on the rear of the pad. You can also adjust the actuation levels of the two triggers and the movement curve on the analogue sticks.

But if you don't like that new look don't worry as the new Elite Wireless Controller allows for swappable components too, allowing you to switch out the D-pad for a traditional switch or change around your thumbsticks too.

There's no word on price yet, but you can guarantee it's going to have some elite pricing to go along with its elite functionality.