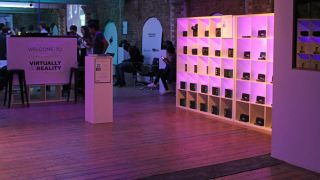 Camden Lock in London always feels like a weird vision of the future. The crowded street food stalls and maze-like atmosphere of the place almost looks the part for a very british version of Blade Runner.

We're here for a slightly different type of sci-fi. Tucked away next to Camden's The Cuban pub, is a small sign. "Try Virtual Reality" it says, pointing ahead up the stairs to the launch party of Virtually Reality, the UK's first space dedicated to flogging virtual reality. Toilets, according to the sign, are located to the right.

I've spent a long time advocating for the rise of the VRcade, spaces where those skeptical of virtual reality can strap on a headset and give it a go. Virtually Reality seems to be the first of these, and while I must confess I was expecting a touch of Apple Store class, what they've delivered instead is a mix of retail store and a classic arcade, but offering VR experiences over Street Fighter II.

From virtually nothing to Virtual Reality

Virtually Reality, the business, started on a street corner in Notting Hill after founder and CEO Alexander Cohen used his rent money to buy 16 VR headsets off the internet. He sold them on the street, selling out in a few hours. From there, they spent a week in a pop-up store at Old Street station before moving into this 2000ft square space in Camden Market.

At the launch event, you can see how far along that idea has come - slightly too loud music thumps while a free bar is sponsored and operated by a fancy gin company. There's no Coca Cola here, if you want a soft drink you'll have to settle for a brand of fruit drink I've never heard of, seasoned with cayenne pepper.

The event is filled with people who probably make a lot more money than I do, grappling with the HTC Vives hanging from the ceiling. Virtual reality is trendy now, and it's never been clearer to me than at Virtually Reality, a store that'll sell you a Google Cardboard with their own logo on it for a price.

Despite the event's hashtag being #MyfirstVR, the launch party itself was poorly set out for a first foray into cyberspace: the headsets sat unattended, leaving you to try to sort out the peripherals for yourself, while thumping loud music played and chatting businessman were inside the safe "chaperone" zone of each HTC Vive.

Taking my partner along to the event to try out virtual reality for the first time, I had to talk her through how it worked while simultaneously keeping her away from the man swinging his arms wildly next to her, trying to blast pretend robots from an imaginary sky.

The launch party, perhaps fitting for the surroundings, has a vaguely cyberpunk feel, where posturing about how cool technology is has triumphed over people. There's a sense, with all of the overt commercialisation, that Virtually Reality is a bit unfriendly to the hacker community who've been tinkering with the technology and trying to bring virtual reality to a bigger audience since the beginning.

Is this a bad thing? It shows that the market is getting healthier, great news for the tech investors that've been tossing millions into a virtual reality shaped hole for the past few years and it's a money spinner for those looking to prey on city-folk looking for something flash to do after work.

Of course, a launch party isn't the same as the day to day operation for any organisation. "We designed the space from the ground up to be social" says Cohen.