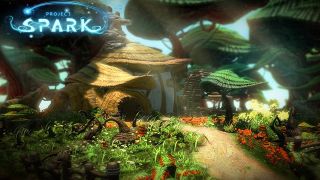 With a video game like Project Spark that lets users create their own games there's bound to be couple of copycats. Just like the way Media Molecule's Little Big Planet brought up copyright issues with music rights, Project Spark is already setting off a whole litany of Star Fox clones and games that look a bit too similar to Minecraft.

At PAX East a panel of developers behind Project Spark explained they want to change the limited perception of what it can actually do. Bradley Rebh, lead designer at Microsoft recalled the reaction most people had after the game's first reveal. "Everybody came to us and thought I can make a fantasy looking dude that kills goblins in a grassy knoll – and that's it I can make fable," Rebh said "But actually you can make way more than that."

Brad Shuber, art director on the game, noted that some users have created amazing work that inspires his own team. "We look at the user generated content all the time and it's like 'wow did you see what that person did with that tree trunk, I can't believe they make this cool tentacle arm with it."

Credit where credit is due

Beyond showing users that they can do more with the tools Project Spark has, it's also been a struggle to convince users to share their works. User-created levels in the current beta are unlocked, which means other users can dig into the content and pull everything from the art to the actual mechanics. While some in-game creators are worried about their work being stolen without any credit.

However, Rheb explained there a new Lineage System the team hopes to implement soon that will make sure the original creators get the credit they deserve. When the new system is added any remixed work will show up with the original creator's name above making sure they get credit.

Project Spark Community Manager Mike Lescault chimed in adding "we have always heard about with IP rights and it's really tough to stop especially in the digital world and where we're going."

"So rather than try and go against the tide we wanted to make sure we can reward people and encourage them to want to have people remix their work," he said.

The Project Spark developers hope they not only encourage people to share more of their work but also change the perception of remixing as part of the creative process. Shuber used YouTube as a typical example where "it's frowned upon to do anything with anybody else's work but here it's something we actively encourage and with our system we try to appease people who say 'oh I don't want my work stolen'"

Rather Shuber sees modifying someone else's work as part of the learning process in which people can work collaboratively as part of the community. "The best way [to learn] is play something you like, go in and pull all the mechanics apart and how it's constructed," he said. "Take the bits and pieces that you think is applicable and learn from it and make your own."