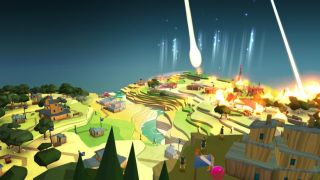 Death and destruction to all backers! (not really)

Despite once describing Kickstarter as "the only way to make a game in today's world", Molyneux believes it can also be hugely damaging. His latest game Godus, which set out to 'reimagine' 1989's Populous, was initially put on Kickstarter in 2012, later launching on PC, iOS and Android after meeting its funding goal of £450,000 ($732,510).

But Molyneux thinks that the Kickstarter route ended up being detrimental to the project, and has warned of the temptations to over-sell a project - something the gaming icon has earned enough of a reputation for over the years as it is.

"What I've learned is that doing Kickstarter and Steam Early Access, before you've got something which is defined and playable, is a hugely risky undertaking that can be very destructive to the final quality of the game," Molyneux told TechRadar at Bilbao's Fun & Serious Game Festival.

"What doesn't work for innovational games, in my mind, is to put an idea down and say 'Here's the idea, give us the money so we can turn it into a game'," he added. "I don't think that works. Because I think what ends up happening, and what ended up happening with Godus, is that people get a view of what the game is going to be like from what you've said here, and that view is quite often different from what the final game is."

During Godus' journey to launch, Molyneux came under fire for several development decisions, including the introduction of pay-to-win gems that weren't mentioned in the original crowd funding pitch. That, according to Molyneux, is the dangerous reality of the Kickstart pitch.

"There's this overwhelming urge to over-promise because it's such a harsh rule: if you're one penny short of your target then you don't get it. And of course in this instance, the behaviour is incredibly destructive, which is 'Christ, we've only got 10 days to go and we've got to make £100,000, for f**k's sake, lets just say anything'. So I'm not sure I would do that again."