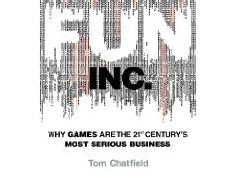 British MPs will hear the views of an author this week who's new book claims that we should all be taking video games far more seriously.

Tom Chatfield will be speaking at London's Royal Society this week (RSA) addressing Ed Vaizey MP, Shadow Minister for Culture, educationalists and games industry executives and explaining the ways in which virtual game worlds can function as 'unprecedented laboratories' for exploring human motivations.

Chatfield – who's new book "Why Games Are The 21st Century's Most Serious Business" is published this week - explains in the Observer this weekend how he thinks games have the (so far, largely untapped) possibility to raise awareness of political, ethical and environmental issues, and also to help educate our children.

Chatfield links a recent YouGov poll that says one in six British kids under the age of seven still have difficulty talking to parental concern about games and consoles. However, the problem, he argues, is not this new and 'exceptionally compelling' medium, more that:

"A lack of parental time and engagement is self-evidently a bad thing, as is the excessive use of any one medium," adding that, "this vision of gaming as a passive, inert activity does little to help struggling parents."

He uses the example of Microsoft's Xbox Live as a good example of how a "pattern of effort and reward, validated by a networked community of players, makes modern games such an awesome engine for engagement."

Chatfield's overall argument is that it is time that we, all of us – the parents, the politicians, the games makers – began "to understand games on their own terms, with all the potentials and dangers that entails: as arguably the most powerful models we have for connecting and motivating, and understanding [the] vast, disparate groups of people a digital age throws together."

"Why Games Are The 21st Century's Most Serious Business" is published later this month and is already available for pre-order over on Amazon.co.uk.