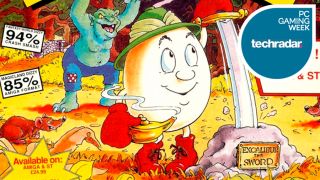 Back in 1992, in a lengthy interview covering every topic under the sun, Amiga Power chatted to the Codemasters (back then known as Code Masters) team about, well, pretty much everything. For everything on the success of Dizzy to how the company wrote the quotes on the back of its own game boxes (yeah — they went there), check out the original article below.

Despite the image that continues to this day, Code Masters isn't two kids in a bedroom playing and occasionally programming games. Far from it – the Darlings do precious little (if any) coding at all these days. Instead, they had a successful – and yes, international – company, ideas dreamt up as school kids selling millions of units worldwide.

In the course of these interviews you'll be reading:

David Darling – Managing Director: Directly responsible for the bulk of the computer game development side of the company (among many other things).

Paul Ransom – European Development Manager: As his title suggests, Paul's responsible on a day-to-day basis for the development and progress of Code Masters computer (as opposed to console) games.

Richard Darling – Research Director: Richard spends most of his time with console development these days – this is definitely where much of the future lies for the Codies, though they're reluctant to leave behind the Amigas and STs, the Spectrums and C64s popular in Europe. Indeed, most of their successful NES games will turn up on the Amgia sooner or later, as the three of them explain…

On the success of Dizzy

David Darling: "We originally designed Dizzy for young kids and he's been good for them, but increasingly it seems to be that everyone's a secret fan! It does seem to be something to do with his character, but equally it's got a lot to do with the mental puzzles in the game – parents enjoy doing them too. In fact, often they play the games with their children, and get just as much fun out of them themselves, so perhaps that's the secret."

Paul Ransom: "Part of my job is to build characters up, and of course the most successful one we've ever had is Dizzy. We're sort of creating a Mario, though he's obviously not as big yet. At the moment Dizzy's far and away our most popular character – CJ the elephant is only two games old, Steg (the slug), Spike (the Viking) and Slightly (the wizard) are all new characters.

"With Dizzy, our egg character, we've obviously hit on something, though we're not exactly sure what. To be honest we still refer to him as 'Mr Easy-to-draw', which is what he is – just a big blob with a face, arms and big boxing gloves for hands. We've tried to give him more character and make him do more things in the newer games, but it's a very odd creation we've got here.

"The fact is, though, people like him – and he gives us a recognisable character to promote the games with, without having to fork out for a licence. Sure, the Hi-Tec Wacky Races property, for instance, would suit us down to the ground, but they had to pay for that, and we didn't.

"Actually, the interesting thing about Dizzy is it took six months from its original 8-bit release for it to start charting – for a long time we thought the game had been a complete flop. It was around the time we were doing lots of Simulators, and the Oliver Twins, who'd done some for us already, turned up with this odd arcade adventure instead of the game they were meant to be doing. We were a bit annoyed with them, but in the end put it out anyway as a sort of favour, and it stiffed, just as expected.

"Then, months later when we'd all but forgotten about it, it started to chart and just stayed there. It wasn't selling an incredible number of copies a month but it was consistent – it became a chart fixture for months. By the time we got round to the sequel so many people had bought the first game and were waiting for the second that it went straight in at number one. And the rest, as they say, is history."

David Darling: "Generally we think you're better coming up with your own charqcters and games – and Dizzy's the real proof of that. Some of the cartoon things Hi-Tec do would work as Code Masters games, but we always think it's better to develop our own. That way we can actually start to think about merchandising the characters back into other mediums ourselves. We're already working on a line of Dizzy products – clocks, mugs and the like. Goodness knows where we go from here, but it's getting interesting.

On the 'new-look' Dizzy

Paul Ransom: "For the new game, Spellbound Dizzy, which we'll probably release at Easter as part of the second Dizzy collection, we've added quite a bit to the character. He's got oxygen tanks and goes underwater for a bit, for instance, but mpore surprisingly, perhaps, he now has a whole range of expressions and changes them throughout the game. It might not sound like much to you, but it's big news for Dizzy!"

Richard Darling: "With each game we just try and give him a few more features, a few new characteristics. The more expressions he has and characters there are in the games, the better, really. Now you can tell whether he's happy or sad and so on.

"Dizzy's been our second release in the States on the NES after a game called Micro Machines, but it's really too early to tell how well he's going down over there."