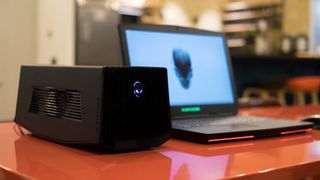 Alienware has now been going for more than 20 years, and it's been a decade since the company partnered with Dell to work together on increasingly ambitious gaming machines. The Miami, US-based company makes aspirational products loaded with power, built with otherworldly designs and carrying premium price tags to match.

According to its co-founder and General Manager Frank Azor, Alienware has fostered an ambition innovation and had a drive to make the best gaming PCs in the business from the very start, even if its core team didn't quite know what they were doing in the early years.

We caught up with Azor to dig deep into the company's history while finding out about newer products - from the Alpha R2 Steam machine to its Graphics Amplifier, Aurora R5 gaming desktop and VR backpack.

TechRadar: Alienware has been going for more than 20 years now. It was the first company to launch an 11-inch gaming laptop, build a Steam Machine and create an external GPU enclosure. Which "first" are you most proud of?

Frank Azor: I think it has to be the launch of the Predator chassis, the desktop case we launched that really defined the look of Alienware back in 2002. I would say that's the proudest and most significant moment in our history. We launched that at a time when pretty much every computer except for maybe Apple ones were beige, boring boxes - or just a black box with very little industrial design attributes.

Design wasn't really a factor in PCs prior to us introducing that product. You look now and design is a critical factor in any premium product out there. The Predator was imitated by so many companies for so long, and that's hugely flattering.

Did you know what you were doing right from the start?

Behind the scenes, a lot of people don't know that we didn't know what the hell we were doing - the Predator was really the first product we developed ourselves from the ground up. We had to learn a lot about product development and engineering. We also had to hire the right people and really take a completely different approach to how we were introducing products and engineering them because prior to that we were mostly doing a really good job as hobbyists - buying great components off the shelf, putting them together, testing and validating them.

How do you approach a new design? Do you start with a problem and design around it, or come up with a cool design and see how it could solve a problem?

There isn't one way that we do it. We're very innovation-focused and allow ideas to come from anywhere within an organisation. We have forums and meetings and ways of engagement that help foster the sharing of those ideas. They may occur at our annual strategy and gaming session that we do at Alienware's Miami HQ, or they may come from an industrial design meeting or from our customers.

We run with those ideas and deliver solutions like the external Graphics Amplifier, or things like G-Sync panels. There isn't a central innovation organization where all the ideas come from - I think that would be very limiting to the creativity process and the potential of the entire organization.

Some people think that Steam Machines have missed the boat. Why does Alienware think that they have a bright future?

My perspective is that Steam Machines have been a phenomenal success, but it depends how what you measure that by. If we remember the PC ecosystem prior to Steam Machines, we had a Windows 8 environment. That was an operating system Microsoft admitted wasn't very focused on the PC gamer at the time. As a result, the gaming community was a little upset by that. Steam Machines then came along and aimed to build and operating system for the PC gamer. After that effort came Windows 10, with DirectX 12. Microsoft really woke and knew it needed to re-engage with PC gamers or really risk losing them.