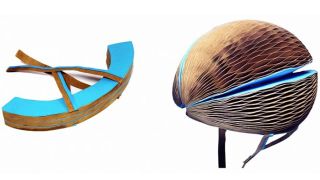 This year's winner of the annual James Dyson Award has been announced - and it's a potential lifesaver.

The EcoHelmet, designed by Pratt Institute of Design graduate Isis Schiffer, picks up this year's top prize of £30,000, being a recyclable, foldable bike helmet designed to accompany bike sharing schemes across the globe.

Made using a honeycomb structural design, it can fold flat when not in use, is resistant to rain for three hours and - most importantly - is being designed with materials affordable enough to be sold for as little as $5 (£4 / AU$6.70).

That last point is the real gem - many cities across the globe are encouraging bike sharing schemes to reduce road congestion and emissions, to great effect. However, few offer safety gear with the bikes, so part-time cyclists often ride unprotected. EcoHelmet's affordable cost and portable nature make it the perfect protective complement to such bike sharing schemes.

“I was lucky enough to be studying at Royal College of Art and the Imperial College of London for a semester, and was granted access to Imperial’s crash lab," said designer Schiffer.

"They had a European standard helmet crash setup that allowed me to gather enough data on EcoHelmet’s proprietary honeycomb configuration to know it was viable and worth developing.”

"But its simplicity belies an impressive amount of research and development. I look forward to seeing EcoHelmets used in bike shares across the world."

Schiffer beat entrants from 22 countries around the globe to be crowned this year's winner. The competition focuses its product, industrial and engineering design challenges around the task of designing "something that solves a problem".

EcoHelmet has now partnered with MemBrain LLC  of Los Angeles where it will undergo further testing ahead of plans to enter a full production run.