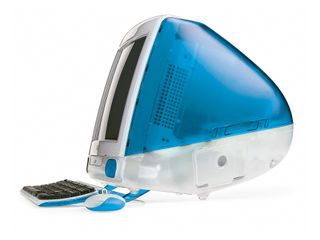 The first-gen iMac is hardly 'new technology'. It was first launched in 1998

If ignorance is no defence in law, then what does that say about the police in Denmark? For a bunch of flat-foots there appeared positively dumbfounded by the sight of a first-gen iMac during an ID theft investigation.

The author of the Rottin' In Denmark blog describes how police burst into their apartment, accused them of ID theft (even though they were the ones who had recently had their wallet stolen) and then demanded to see their room-mate's computer. The resulting conversation goes like this:

"'That's the screen.' He had lapsed into the voice you use to explain to your 6-year old cousin how the toaster works.

"'I mean the compuuuuuuter. Understand?'

"'Dude that's the whole computer. Right there. The blue object the size of an armadillo.'

"'No. Where the daaaaaaata goes. The computer part.'

"'That is the computer. For Hell.' Danish swear words aren't as satifsying.

"'So that's the entire computer right there?'

"I was standing there with a look on my face like I was watching a dog walk on its hind legs.

The first-gen Apple iMac was introduced in August 1998.