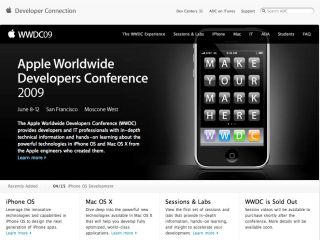 Apple should also announce that it's adding an apostrophe after Developers

When Apple CEO Steve Jobs launched the iPhone at Macworld 2007, he famously borrowed a quote from ice hockey great Wayne Gretsky: "'I skate to where the puck is going to be, not to where it's been.' That's what we try to do at Apple."

Now more than ever, Apple needs to live up to that philosophy - and at its World Wide Developers Conference (WWDC) on Monday 8 June, it has the perfect opportunity to do so.

Here's how we believe that Apple should do it…

1. The triumphant return of Steve Jobs

Steve's health-induced hiatus has robbed the tech world of one of its greatest showmen and visionaries - even if he has been involved in making the big decisions at Apple since his no-show at Macworld 2009.

With the tech industry in the global downturn doldrums, we need Jobs more than ever to show the way. And let's face it, Apple's own PR shindigs have lacked a certain chutzpah since Jobs was forced to go AWOL.

Even though WWDC 2009 will undoubtedly focus on Mac OS X 10.6 Snow Leopard, now would be a great time to reveal what Apple has next up its sleeves.

We've already seen tantalising hints, thanks to a patent application that suggests Apple is beavering away a Minority Report-style makeover - what we really need is to add some flesh to those tantalising bones.

If nothing else, a nod towards the Mac operating system's future direction would give Windows 7 a run for its money. It would also show that Apple isn't standing still when it comes to next-gen UI development.

We'd also really, really like confirmation on whether Snow Leopard will run on legacy PowerPC Macs or not - there are millions of Mac users out there who'd really like to know either way.

3. An end to the iPhone duopoly

While it's understandable that Apple needed to partner with major telcos to punt its revolutionary smartphone out into the world, our current lack of choice is starting to outwear its welcome.

Rather than being tied to a single carrier in each territory, Apple needs to make the iPhone available to everyone no matter which network they're on, and at reasonable prices to boot. Luckily there's some evidence that may yet come to pass. Here's hoping, eh?

Again it's likely that much of WWDC 2009 will be devoted to the previously heralded features of the iPhone 3.0 OS - but we don't think it's unreasonable to ask that we at least be given a hint as to what the future holds.

4G and Adobe Flash support would be great for a kick-off, but WWDC 2009 looks like a great opportunity for Apple to defend its position in goal and kick Windows Mobile and Google Android into touch.

This has to be a given, surely? The iPod already has a myriad of models that target different needs and budgets. It's high time the iPhone did the same - especially if Apple is serious about competing with major incumbents like Nokia in the long-term.