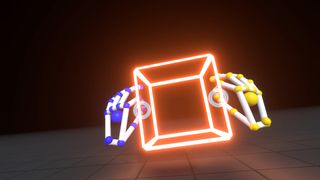 Earlier this year Leap Motion announced its ambitions to make controller-free VR a reality, and now it's bringing us one step closer by introducing the software you'll need to bring your hands into virtual space.

The new bit of software is named the Interaction Engine, and it essentially acts as an intermediary translator between the real-world hand movements captured by Leap's motion trackers and the popular gaming Unity Engine. Essentially this new analog-to-digital layer tells virtual objects when and how to react realistically when they've been grasped, pushed or thrown.

Beyond creating a more lifelike simulation, the Interaction Engine can introduce new physics into games, such as the ability to pass your hands through elastic objects and customize throwing physics.

Altogether these features should lead to a more immersive experience than simply pulling the triggers on the HTC Vive controllers to pick up an object. Although there isn't any physical or haptic feedback, Leap Motion argues its method will open the way to subtler interactions in the virtual worlds.

The Interaction Engine is available to download now, and users can add it on as a module for the Unity Engine, which powers virtual reality experiences such as Ghostbusters: Dimension and A Haunting: Witching Hour. It's just one piece of Leap Motion's big plan to create a hardware and software platform built specifically for virtual reality, called Orion.