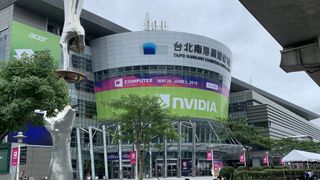 Computex 2019 is now drawing to a close – it ends on June 1 – and we've been at the how in Taipei, Taiwan, all week to bring you the latest and greatest devices that are being shown off by some of the biggest names in computing.

We've had time to get our hands on some of the most exciting tech on the show floor, and we've also put together roundups and in-depth analysis of what we've seen during the week – and what it means for the future of computing.

So look out for our hands-on impressions on this page, as well as all the biggest news from the show.

Our in-depth expert analysis and opinion pieces about what we saw at Computex 2019.

Here you'll find the roundups and reviews of all the tech we saw at Computex 2019.

At CES 2019, AMD announced its 7-nanometer (nm) Zen 2 architecture, which will be behind its Ryzen 3rd Generation, Threadripper 3rd Generation and even its upcoming Epyc processors for servers.

AMD didn’t mention any specific processors at that event, however, opting instead to show off an 8-core, 16-thread processor. Still, rumors suggest we may get as many as 16 cores and 32 threads in a new Ryzen processor – we expect that beefy piece of silicon to make an appearance at Computex 2019 (assuming it’s real.)

Additionally, AMD is also in the business of manufacturing graphics cards. There was speculation that AMD Navi 10 graphics will show up at Computex 2019, and sure enough, AMD finally revealed its Radeon RX 5000 series of graphics cards.

The AMD RX5700 is the headline GPU here, and is aimed at the mid-range market. It will launch in July, and while we didn't see any specific model, we do know that more information about Navi will be at E3 2019.

AMD also showed a Strange Brigade benchmark run, where not only did it beat the  Nvidia GeForce RTX 2070, its closest competitor, but it was able to stay above 100 fps consistently.

No matter how you slice it, Computex 2019 has already been massive for AMD. The underdog chip maker has risen to the top of the processor world, more than doubling Intel’s sales, so we expect a celebratory Computex.

In fact, it appears that AMD's stock have increased by 10% after its strong showing at Computex 2019, and we think this year's event could be AMD's big break.

Asus is without a doubt one of the biggest computing companies in the world. From gaming laptops to Ultrabooks; from motherboards to the best graphics cards, Asus does it all.

However, Asus kept a relatively low profile over the last few months, perhaps having unveiled a slew of Ultrabooks and gaming laptops at CES 2019. However, with Computex being on Asus' home turf, we had high hopes the the company would bring the goods for this year's show - and we weren't disappointed.

Coninciding with the Taiwanese company's 30th anniversary, Computex 2019 saw the reveal of a number of exciting new devices, many of which have limited edition variants to celebrate this year's milestone.

So, we got the innovative ZenBook Duo and ZenBook Pro Duo ultra-portable Asus laptops that both rock dual 4K screens, along with powerful 9th generation Intel hardware and Nvidia graphics.

Dell has certainly brought the goods to Computex 2019, with the company unleasing a number of gaming laptops in both its G3 and Alienware brands.

The new Alienware m15 and Alienware m17 launched at Computex 2019 will boast updated hardware for 2019 and a better design to keep cool inside their even thinner chassis,.

Both Alienware laptops are powered by 9th-generation Intel Core i5 to i9 CPUs, which are among the best processors on the market. In addition, the lowest GPU on hand is now the Nvidia GeForce GTX 1650 (from the previous model’s GTX 1050 Ti and 1060).

We got a change to go hands-on with the Alienware m15, and were very impressed.

Dell also announced a redesign of its excellent Dell XPS 13 2-in-1, with a newer keyboard, a larger touchpad and better, 10-nanometer (nm) Intel performance.

We got time to test it out with our hands-on review - and we liked what we saw. We also got hands-on time with the new Dell XPS 15 - though the changes there were less revolutionary.

Gigabyte’s Aorus brand is behind some of the best gaming laptops and components on the market. Therefore, at Computex 2019, we could see them unleash anything from new motherboards to new gaming laptops.

For example, Gigabyte refreshed its Sabre gaming laptops with Intel Optane drives – the first gaming laptops to do so – at Computex 2018. At CES 2019, on the other hand, it unveiled the brand-new Aero 15 with Microsoft’s Azure AI for hardware performance optimization. All we know is that Gigabyte will be there. Beyond that, your guess is as good as ours.

Ever since AMD Ryzen first hit the market, Intel has been feeling the squeeze. It is still manufacturing some of the fastest processors in the world, like the Core i9-9900K. However, the value just isn’t there, so it needs an impressive showing at Computex 2019 to fend off competition from AMD and Qualcomm.

The company is off to a good start, as it has finally announced that its 10nm Ice Lake are shipping right now, and will arrive in laptops by the end of the year.

Intel Ice Lake processors will range from Core i3 to Core i7 and feature up to 4-cores and 8-threads, with turbo boost speeds up to 4.1GHz.

Intel's Project Athena, was also announed at Computex 2019, and we got a better look at what laptops using Project Athena tech will look like.

Project Athena is a multi-year initiative that will see Intel pushing to advance computing in several key areas, including performance, battery life, connectivity and form factor.

Intel Ice Lake 10th-generation processors are just the first part of Project Athena, and will work towards achieving these long-term computing goals. These new chips will be based on the Sunny Cove architecture announced back at CES 2019, and will include features like WiFi 6 and much more powerful Intel Gen11 graphics.

Intel is also refreshing its desktop processors as well, with the Intel Core i9-9900K and the Core i9-9900KS getting a turbo speed boost to 5GHz on all cores, which should give the newly announced AMD Ryzen 9 3900X some competition.

At Computex 2019, MSI brought a ton of powerful gaming laptops, including a redesign of its Titan series in the GT76 Titan. We also saw plenty of cases, motherboards and even a couple creative-focused desktops. MSI gaming laptops are definitely going to be the devices to look out for this year.

MSI also showed off a curved gaming PC case, and while we probably won't see it in store shelves it was definitely one of the best PC cases of Computex.

We also saw some new RTX-equipped laptops from MSI for Nvidia's Studio program, that should be among the best laptops for creatives.

Rather than revealing any new Turing GPUs, Nvidia's Computex 2019 presence is focused on the creatives out there. Nvidia revealed its new Nvidia Studio platform, bringing pro-level Quadro graphics to thin and light mobile workstations. Nvidia is hoping to leverage the power of ray tracing to make life easier for freelance creators that don't necessarily have the budget for a beefy workstation.

Nvidia claims that an RTX 2080-equipped laptop for creatives will be up to seven times faster than a MacBook Pro in the same workload. This is thanks to a new software layer exclusive to Nvidia GPUs.

Nvidia also showed off some new G-Sync monitors, including some mini LED-equipped displays that offer up to 1,000 nits of brightness and refresh rates up to 144Hz for 4K panels. We got a look at some of these displays in person at Computex 2019, and we can attest that they're absolutely beautiful.

We were also told that Nvidia has finished testing over 500 FreeSync monitors for G-Sync compatibility, and out of all of them only 28 passed.

Unfortunately, we didn't get a glimpse of the "Super" product that Nvidia teased last week, but we think it will make an appearance at E3 2019, instead.

Finally, Nvidia showed off Quake II RTX, which adds full path tracing to the 22 year old game. And, it's more than just a demo: you'll be able to download the first three levels for free on June 6, with the option to buy the full game. And, if you already own  Quake II, you can direct the Quake II RTX download to your existing installation to experience the full game with ray tracing.

At Computex 2019, Qualcomm and Lenovo announced the world’s first 5G laptop, which will be powered by Qualcomm’s Snapdragon 8cx platform.

Known as "Project Limitless," the laptop will be powered by Qualcomm’s Snapdragfon 8cx 5G compute platform, which is the first ever 7-nanometer platform built for PCs that offers 5G data connectivity built in.

Project Limitless will benefit from the Snapdragon 8cx’s improved performance, battery life and connectivity compared to Snapdragon-powered laptops that have been previously released. It could finally make Snapgdragon laptops truely competitive with Intel-powered devices.

At Computex 2019, you can be sure that pretty much any high profile computing company will be there to show off some new hardware and software.

For example, HP wowed us all with the Envy Wood - a series of laptops made (partially) out of wood, giving them a unique, yet premium, look and feel.

That’s not to mention all of the smaller manufacturers that will also be there. Lian Li will surely be delivering some beautiful PC cases, G.Skill will probably show off some new RGB memory sticks, and BenQ will show off some new monitors for professionals and gamers. There are more than 100 exhibitors this year, so get ready for a smorgasbord of new hardware.