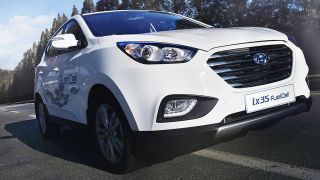 Not happy leaving all the enviro-glory to Tesla, Hyundai has welcomed the first of a fleet of hydrogen-powered ix35 Fuel Cell vehicles into Australia.

The zero-emission ix35 Fuel Cell is the world's first mass-produced hydrogen-powered vehicle, and Hyundai plans to operate a fleet of them from Australia, with testing and demonstration drives commencing early 2015.

The ix35 Fuel Cell runs on Hydrogen and only emits water vapour – the hydrogen from the car's fuel tank mixes with air and is converted to electricity by a fuel cell stack, which then powers the car's electric motor.

Hyundai claims the ix35 Fuel Cell has a maximum range of 594km, and produces 100kW of power with 300Nm of torque.

The HRS is scheduled to commence operation in early 2015, and Hyundai hopes it will be the first step towards building 'Hydrogen Highways' for Fuel Cell Electric Vehicles (FCEV) like the ix35 Fuel Cell across Australia, similar to ones proposed in Europe and the US.

Whether or not Hyundai has any success will likely depend on the enthusiasm of governments and other private investors for trumping up the not inconsiderable cost for such a project.