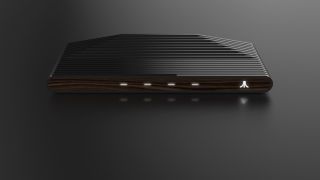 The NES Mini (soon to be followed by Nintendo's SNES Mini) opened the floodgates for a retro-console revival – reworked versions of classic machines with all the mod-cons you'd require to play today. At E3 a resurrected Atari teased its own entry into the market – the Ataribox – and now it's given us a few more details on what to expect from it.

Taking its cues from the Atari 2600, the company is planning on releasing two versions of the machine – one with the classic black and wood panelling design, and another with red accents. Each will have a raised back and 'ribbing', making it reminiscent of the console that inspired it, while options for glass or wood front finishes will be available.

It will however have some features more in line with modern expectations – a HDMI port can be found on the rear along with four USB ports, with support built in for SD card expansion, which suggests uses will be able to sideload their own content on the machine. This contrasts with Nintendo's approach, locking down the software to only the pre-loaded titles that ship out of the box.

Perhaps most intriguingly, Atari suggests that the Ataribox will also support "current gaming content" through "modern internal specs". While the internal hardware has yet to be detailed, there's the suggestion then that the Ataribox could be more powerful than your average retro console. Whether it'll be playing PC software (the 'box is expected to run PC hardware) or some of the newer titles in Atari's back catalogue.

However, with no pricing or firm release date information yet set, let alone a complete spec sheet, there's some trepidation here. Retro fans, particularly of the Atari era, have been burnt recently – a Spectrum revival ended with disastrous results, with a Kickstarter campaign that never delivered what was expected. Though Atari now licenses its brand out, it's moved to reassure fans that all is going well with the Ataribox.

"We’re not teasing you intentionally; we want to get this right, so we’ve opted to share things step by step as we bring Ataribox to life, and to listen closely to Atari community feedback as we do so," said an email from the Ataribox team.

"There are a lot of milestones, challenges and decision points in front of us in the months ahead. We’ll be giving you lots more information and status updates as we progress."