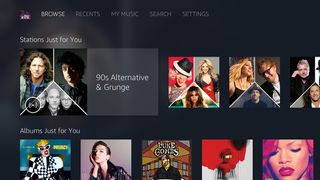 It seems the big tech companies are ready to start being a little friendlier to each other as the holiday season approaches – Apple is flicking the switch to enable Apple Music on Amazon Echo devices, and now Amazon Music is coming to Android TV as well.

As Android Police reports, the app is already live in the Play Store. You can't actually down and install it yet, but it looks as though Amazon will be pushing it out to the masses in the near future, which means you'll soon be able to pipe more than two million songs through your Android TV television or set-top box.

This is the basic Amazon Music service that's provided as part of an Amazon Prime subscription, not the Amazon Music Unlimited service that costs more, has a bigger song selection, and is a genuine rival to the likes of Spotify.

Spotify is already available on Android TV as a separate app, and Google Play Music is present too (though not YouTube Music, yet). Missing from the Android TV line-up is Apple Music, so this would give Amazon an advantage for Android TV owners.

As all Android TV devices have built-in Chromecast functionality anyway, it's not a huge problem to cast music from a bunch of different apps on a phone. However, having a native app for the platform means everything can be operated and controlled on the big screen – and the Amazon Music Android TV interface looks fairly polished.

As yet there's been no word from Amazon about when the new app might go live, but we'd expect it to be within the next few days. Keep your eyes on the Google Play Store listing if you're eager to get hold of the app as soon as possible.