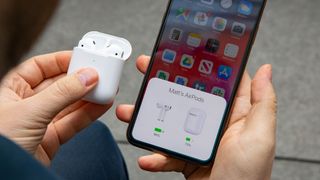 Apple's Wearables, Home, and Accessories business has enjoyed a rather impressive second quarter of 2019, generating a record-breaking $5.1 billion for the company.

The strong results were announced on the company's earnings call, however it was against the backdrop of an overall decline in revenue - Apple reported an overall income of $58 billion this year, a decline of from the $61 billion of last year.

A large part of the category's success appears to be down to the newly updated Apple AirPods (2019), which Tim Cook jokingly described as "a cultural phenomenon", saying that "demand has been incredible".

Apple CFO Luca Maestri also said that the company was “working hard to catch up with incredible customer demand”, which has been "off the charts" for the AirPods.

The newly upgraded AirPods (2019) come with better connectivity and battery life than the original AirPods, and sport a new ‘Hey Siri’ voice activation feature thanks to the inclusion of Apple's proprietary H1 headphone chip.

An optional wireless charging case also means you can use a Qi-compatible charging mat to power up without cables.