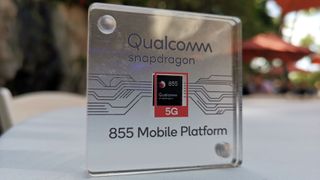 A new year is almost upon us, and that means there’s a new top-end chipset that’s set to appear in a large majority of top-end Android phones.

The big talking point is the unavoidable topic of 5G, but that's not all we've learnt about the Qualcomm Snapdragon 855. We're expecting this chip in phones from the Samsung Galaxy S10 to the OnePlus 7, as well as the Google Pixel 4 and more.

Below you’ll find our selection of the best features you may get on your phone. If you want a full rundown of all the new features on the new chipset and therefore phones, you’ll find everything you need to know about the Snapdragon 855 here.

A note upfront: it's going to be limited at first depending on where you live and what carrier or network you’re on, but 5G is finally on its way with the Snapdragon 855.

We know OnePlus will have the first 5G phone in Europe, and Samsung has confirmed the company is planning to release a 5G phone next year too. Any device that has the Qualcomm Snapdragon 855 inside will be able to use 5G, but not every phone will have it enabled.

What exactly is 5G? Essentially expect much faster internet in a jump that's bigger than the speed boost you got switching from 3G to 4G. It’s going to be a slow process for networks and carriers across the world to adopt 5G, but it's a step toward having superfast mobile internet on your phone.

Own a phone with an in-screen fingerprint scanner? If your fingers are wet or slightly oily you may find the scanner won't work, and that's something Qualcomm wants to fix with its next-gen scanner.

The new 3D Ultrasonic fingerprint scanner technology from Qualcomm is meant to be more accurate and will be capable of scanning your finger through water and a variety of different liquids.

It’ll hopefully stop that frustrating moment when you’re trying to unlock your phone in the rain, but the scanner just won’t work. It will also generally speed up how quickly you can unlock your device.

You can watch videos for longer

A new power saving mode within the Snapdragon 855 should allow for more efficient power consumption while watching video.

It's a feature the company is calling Cinema Experience, and it works at lower power to mean playback of video will take up a lot less of your battery.

That should hopefully translate to more time watching Netflix or YouTube, but how manufacturers implement these changes will decide whether or not we'll see any real life usage benefits.

You can be friends with Alexa and Google Assistant

That's something some devices have enabled in the past, but it has been a lot more hassle to get working, since you essentially had to download separate apps and set them up yourself.

Bokeh mode... but for video

Last, but by no means least, is a big camera improvement. Bokeh or Portrait Mode on your phone is a popular effect that blurs the background of an image. Almost every flagship has it, but 2019 is when it's going to get much better.

A new upgrade in the Snapdragon 855 brings a computer vision ISP. That uses artificial intelligence to allow for a bokeh mode in 4K HDR video.

It will blur the background of your image in realtime and allow you to focus on the foreground within your video as well as your photos. We saw the feature demoed on stage at the Snapdragon Summit and it appeared to work fantastically well.

If it'll work just like taking bokeh images in real-life scenarios remains to be seen, but it's an innovative new way of shooting video that will allow you to create some incredible effects on your phone.