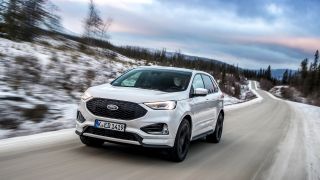 The Ford Edge for 2019 has had a facelift – but unlike a human facelift, this isn't an old machine trying to look younger, only to be left with a paralyzed and limiting result. This car is bursting with the tech only a youthful, cutting-edge machine could offer. The difference, compared to the competition, is that Ford is able to offer all that tech for a slightly more affordable price without compromising on quality.

To test if Ford has simply crammed lots of tech into a car shell that's been on US roads for years and hit the UK in 2015, we took the new model into the snow and ice to push it to its own edge. From ice-driving to off-roading, this car was introduced to its limits and then asked to push through them.

Adaptive cruise control is a fantastic feature that's worth every penny when offered as an optional extra. In the case of the Ford Edge ST you get it as standard meaning you can take your feet off the pedal and let the car do the braking and accelerating for you. While this is great for motorway driving and perfect for slow moving traffic, it also works on ice. Yup, we took the car onto an ice track and let it take over.

Needless to say, trusting a car to drive you in general is tough. On ice, doing so without touching the pedals is a new level letting go, but the car did its job as you'd expect, recognising the car in front and slowing as it needed to – even with the ice adding braking distance. In fact, we came closer to a crash in control ourselves then when the car was working its magic.

Ford has added a slew of safety features in this model, including Evasive Steering Assist to dodge a potential accident. Lane Centering is another useful touch which allows you to let go of the wheel when on a motorway so the car will not only work the pedals but the steering too. Of course, you get the usual bleeping alert when you let go for too long, but it's not as annoying and shocking as some cars.

Lane Centering deserves a little more attention here as it really performs well. Despite being on snowy roads where the markings were barely visible in many instances, the car was often able to stay in lane anyway. We wouldn't advise letting go entirely in that situation but to know it can handle in the extreme makes for reassuring levels of trust when taken to a normal road.

Inside the Edge is a new twist wheel control for gearing, which makes the car look a lot more premium, like the high end Audi Q5 competition. This has also made enough room to add in a wireless charging slot, which means you can throw your phone in and get going without worrying about plugging in to boost the battery.

If you do choose to plug in, you can enjoy Android Auto or Apple CarPlay via the USB connection, which also affords a slightly faster charge rate. When you don't use either of these you get Ford's Sync 3 operating system. It might not be as snazzy as some of the competition but in a car that simplicity which it affords is often a positive. You still get voice controls, app support for the likes of Spotify and connected phone messaging.

The new look of the 2019 Ford Edge is a big jump forward into a more aggressive and commanding stance. The grille is now a trapezoidal shape, which is set off by daytime LED running lights. As a result, the car looks more refined and aerodynamic while maintaining a strong road presence.

That said, this isn't too big a car; you can comfortably poke about town in it thanks to a decent turning circle, or command the major roads with the high riding position. Despite feeling like a smaller car to drive, there are masses of room inside both in terms of head and leg room but also boot space thanks to a whopping 605 litre capacity. That's pushchair storage and super safety ticked off, making this an ideal family car.

Another big sell for the Ford Edge is what the company calls artificially intelligent driving. No, the car isn't smart enough to drive for you, completely – yet – but it will be able to determine the driving conditions and adapt the car to offer the most efficient performance.

That means the Edge can go into All Wheel Drive mode for conditions that require it, like the ice driving and off roading we did, but then can also switch to two wheel drive to save fuel on easier roads. How? Ford describes it like this:

"All-wheel drive disconnect uses a dedicated electronic brain to monitor inputs from systems including traction control and anti-lock brakes to determine wheel spin and slip; windscreen wipers and outside temperature to determine weather conditions; and even monitors if the new Edge is being used to tow a trailer."

This is a great system for saving on fuel and in most situations will work perfectly. When taking the car around that ice track and through an off-road course it performed well. However, while it capably handled rough terrain, including some steep side angles and deep ruts covered in snow, ice-driving was more challenging.

Turning off the traction control kept us slow enough to stay on the track (tick in that box then), but for having a bit of fun we were left wanting because the car still had in-built systems working to control power output for safety. The car is definitely safe, but you may find it a little too 'nanny state' for all situations.

Ford has taken the Edge to the next level in terms of design, technological advancements and safety. With masses of storage, smart driving systems that make long journeys and traffic effortless, plus decent fuel mileage for the size, this is a very attractive car indeed. It undercuts the more expensive Audi Q5 competition, but gives you a lot more than Ford's more affordable Kuga offering.