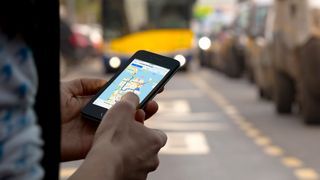 Apple Maps has come a long way. Although its early reliability wasn't great, Apple has done a lot to bring the service up to speed, making it a pretty solid option now for use as your go-to mobile map.

As with most of Apple's software it has good design, smooth performance, and relative ease of use, as well as Siri integration. However, there's one thing that it has yet to fully embrace: public transit info. This information is scheduled to be added with iOS 9, but there's actually no need to wait: you can make Apple maps work with public transit info right now.

The trick to accessing public transit info via Apple Maps is to make it work in conjunction with other apps already installed on your iPhone. It's a built-in feature of Maps, but that functionality might not be obvious unless you know where to look. When you search for or touch a specific location in apps and select the navigation option (by touching the car icon) you'll see three options across the top: Drive, Walk, or Apps. When you click that last option, Apps, you're offered the chance to see your route in an alternative app, and you'll also be presented with several options from the App Store.

When you select an app in this manner, your starting and destination points should transfer over (so you won't have to enter that info over again), serving as a workaround to get public transit directions through apps such as Google Maps, Transit, Here, or other options.

This feature also works great when you want more info than Apple Maps provides - it works especially well with Google Maps (which tends to have generally the most accurate directions and a lot of extra details that still aren't found inside of Apple Maps) and Waze, which provides a cartoonish interface that works well for navigating through traffic and keeping tabs on your friends.

Though it's not as nice as built-in public transit info, the apps-inside-the-app feature is a convenient workaround for now. Even after iOS 9 hits, Apple's transit pledge may not make its way to your specific city right away, so this procedure could still be a useful option for many months to come. If nothing else, it's a pretty good method for discovering new map apps - something Apple is always happy to facilitate.