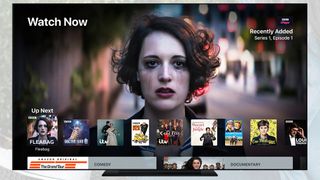 The TV app for the Apple TV is Apple's official attempt to put all your television viewing in one place, offering searches and recommendations across multiple apps through a single interface. For almost a year it's been a US exclusive, but users are now starting to see it appear across the UK and Europe.

As spotted by MacRumors, the app is now springing up on fourth and fifth-generation Apple TVs in Europe, as is the accompanying iOS app that lets you carry on watching on your phone and tablet, which replaces the Videos app.

The US version of the app covers some 60 separate services, and in the UK the selection includes BBC iPlayer, Channel 5, and ITV. At the moment there's no Channel 4, and on both sides of the Atlantic Netflix keeps its original shows in its own app (though you can find other Netflix content in the TV app).

Amazon Prime Video is included under the Apple TV app umbrella, which itself only arrived on boxes this week after years of wrangling between Apple and Amazon. It's obviously been a busy week for the Apple TV software engineers.

Check out the UK page for the Apple TV app for more information about the service, which was rumoured to be on the way after users spotted BBC iPlayer adding support for the app in its latest update. Apple had promised to get the app out to UK users before the end of the year, so that promise has been kept.

You shouldn't have to do anything to get the TV app to appear on your devices except be patient, but if it hasn't shown up then a reboot of your Apple TV box, iPhone or iPad might hurry the process along a little bit.