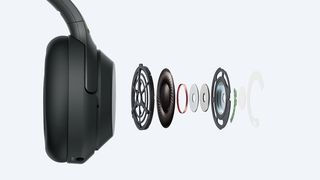 The Sony WH-1000XM3 Wireless Headphones have been our top pick for the best headphones since their release in August 2018 – and now an FCC filing suggests that a new pair of Sony noise-canceling headphones are on the horizon.

Spotted by The Verge, an FCC filing for the Wireless Noise Canceling Stereo Headset WH-1000XM4 was submitted by Sony Corporation on December 15, which suggests that a successor to the highly successful wireless headphones could be announced soon.

While the FCC filing gives no indication of a release date, the Sony WH-1000XM4 could be announced at CES 2020 in Las Vegas.

The world's biggest tech show runs from Tuesday January 7 through Friday, January 10, and promises lots of product launches and announcements from big players like Sony.

Although the Sony WH-1000XM3 successfully fought off competition from Bose in 2019, Sony could take a leaf from its competitor's book and apply noise-cancelation to phone calls as well as music, just like the Bose Noise Cancelling Headphones 700.

This could address the mediocre call quality we discovered in our Sony WH-1000XM3 review.

We could also see improved audio quality; while the XM3s sounded undoubtedly brilliant, it's been sixteen months since they were launched – and audio technology is improving all the time.

Sony could achieve this by including support for Qualcomm's latest Bluetooth codec, aptX Adaptive, which delivers lower latency, higher resolution wireless audio than its predecessors.

It may be time for a change in terms of design, too; Bose's Noise Cancelling Headphones 700 and the Sennheiser Momentum Wireless (2019) are so striking, Sony's headphones look a little... drab in comparison.