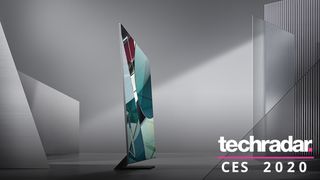 There’s a lot of noise at conventions – and CES 2020 is no different. There are hordes of attendees, whirring gadgets, creaking exoskeletons (yes, really), speakers blasting all around, and (of course) plenty of televisions showing off what they can do.

The problem is that built-in audio – that is, the sound capability of speakers baked right into the television – is often lacking. On cheaper sets, you’re often stuck with tinny 10W output, while more expensive sets will be designed to be used in tandem with a soundbar or external setup. If you’re spending a fortune on a television, after all, it’s likely you’ll be able to afford a sound system to match.

Listening to the built-in speakers on Samsung’s new flagship 8K QLED, the Q950TS, hit home for me how often TV manufacturers resort to half-measures to prop up their audio, or simply leave it to shoppers to go find an audio solution elsewhere.

What’s the problem? There are a few (quite major) TV brands currently making use of ‘actuators’ in their television panels: cone-less audio drivers that vibrate the panel itself to emit sound from across the panel. While this stops audio being isolated to only one location, it also muddies where the sound is coming from, with the effect of even small or inconsequential sounds filling the room, like a footstep echoing throughout a cavern.

Sony’s Acoustic Surface Audio+ technology is guilty of this, even as it attempts to use the panel-vibrating tech to differentiate its sound solutions from other television competitors. It feels like a great idea in theory, that in practice loses audio detail rather than adding it – but is deployed widely across Sony’s premium television lineup (including the new 8K Z8H and A8H OLED).

Hisense was also present on the show floor with panels that vibrate with sound for a similar effect – using the term ‘incitors’ rather than ‘actuators’ – and it’s a bit devastating to hear audio distorted in the name of technological progress.

This isn’t a problem if you’re channeling audio through a soundbar or surround sound system, and therefore sidestepping built-in speakers – but you shouldn’t have to rely on that solution either.

Not so good vibrations

Samsung’s response has been with a technology called OTS+ (Object Tracking Sound+), which has been deployed in its 2020 range of 8K QLED TVs, with a slightly simpler version in its 4K QLED range called OTS (without the ‘+’).

Object Tracking Sound+ and Acoustic Surface Audio+ are similarly phrased pieces of jargon (why is everyone adding pluses to things these days?) but a world apart in their end effect.

Samsung’s Audio R&D vice president, Allan Devantier, points out that, with TV panels getting bigger and bigger, “speakers on the top, side and bottom are all far enough apart to be perceived as distinctly different sources. For example, properly done the sound from the side or top speakers do not ‘color’ the sound from the main speakers on the bottom. So, we exploit this property with OTS and OTS+."

In that situation, you can turn the panel itself into a single source, but you’re essentially vibrating a piece of glass and blurring the sources into each other: “Placing actuators that drive the screen causes the whole screen to vibrate and therefore ‘distinct’ channels (i.e. left, right, surround) are lost. So using real speakers is still better.

“Other than some ‘electrostatic’ speakers (which are nothing like the actuators some TV companies are trying to make sound with) most audiophile speakers still use good old woofers and tweeters – and for good reason.”

The flagship 8K QLED for 2020, the Samsung Q950TS, makes use of an array of audio drivers located around the panel casing – which are housed in the bottom, sides, and top of the television. With this OTS+ array, the set is able to shoot out audio from multiple places, giving a real sense of place to sound as it travels across the screen, rains down from above, or runs off into the distance.

Whether listening to scenes of war, or the rich rhythms of Billie Eilish’s pop track Bury A Friend, the depth achieved through multi-channel audio that varied in height, and not just shunted out in one direction – downward-firing, rear-firing, or upward-firing, for example – was astonishing.

It’s obviously not a solution for cheaper sets – the best features rarely are – but OTS+ is an example of audio given the space to breath, with the precision it deserves, and other TV brands should take note.