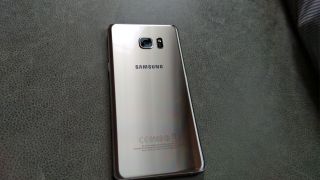 Update: Samsung has called for a halt to all Galaxy Note 7 sales and exchanges worldwide while an investigation into reports of combusting phones is underway.

The company urged all Note 7 owners - whether of an original device or a replacement phone - to power down and stop using their handset, as well as encouraged them to "take advantage of the remedies available."

Those remedies include taking your Note 7 into the carrier or retail store where you bought the device and seeking a full refund or exchange.

"We remain committed to working diligently with appropriate regulatory authorities to take all necessary steps to resolve the situation," Samsung said in a statement.

Samsung has confirmed to TechRadar that the new claims that replaced Note 7 units are still catching fire has forced it to alter the production schedule.

It's rumored that creation of new models has ceased, but the brand has chosen its words carefully in a statement to us:

"We are temporarily adjusting the Galaxy Note7 production schedule in order to take further steps to ensure quality and safety matters."

'Safety is the highest priority'

It looks like the world's biggest smartphone brand is going to have to do some serious damage control over the incident, where a US citizen claimed that his phone woke him up smoking and on fire, causing him acute bronchitis:

"We want to reassure our customers that we take every report seriously and we are engaged with Mr. Klering to ensure we are doing everything we can for him. Customer safety remains our highest priority as we are investigating the matter."

Klering claimed that a Samsung representative had accidentally sent him a text stating (according WKYT in the US): "Just now got this. I can try and slow him down if we think it will matter, or we just let him do what he keeps threatening to do and see if he does it."