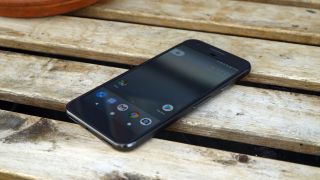 Just the other day we heard that two phones, codenamed 'Walleye' and 'Muskie', were in the works at Google, and now we’ve got word of a third, going by the name 'Taimen'.

This information comes from multiple sources speaking to Droid Life, sources which also corroborate the Walleye and Muskie leak, meaning this is likely a third phone, rather than just an alternate name for one of those.

Two of these (likely the original two) are said to be the Pixel 2 and Pixel 2 XL, so where does that leave the Taimen? Well, details are slim, but a Taimen is a large fish, suggesting this could be a big phone, and indeed one of the sources claims it’s going to have a bigger screen than either the Walleye or Muskie, but that it is a phone rather than a tablet.

Given that the Pixel XL has a 5.5-inch screen we can assume then that this upcoming handset will be larger still.

That would make sense, since Google doesn’t have a proper phablet in its current smartphone line-up, and since rivals like the LG G6 - and in all likelihood the Samsung Galaxy S8 - are already creeping towards 6 inches.

The fact that Taimen has leaked separately from the other two could mean that it will also launch separately, so don’t be surprised if it’s not present at the Pixel 2 launch, likely happening in October, but we imagine it will arrive sometime this year if it’s real.

And we have to wonder what it will be called when it does, given that the XL name is already taken. Could we be getting a Pixel 2 XXL? A Pixel 2 XL Plus?

Hopefully Google will use this time to come up with something a little more elegant.